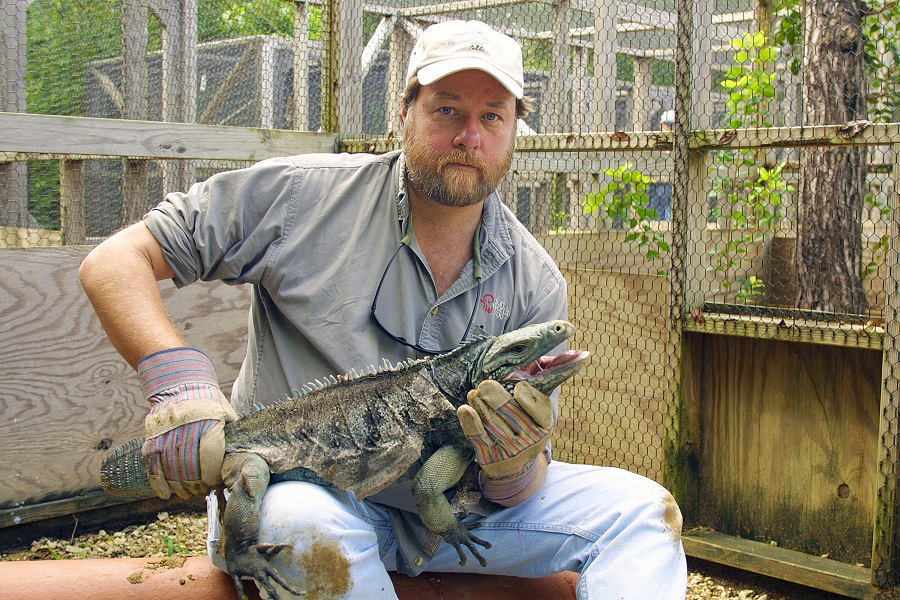 Powell, OH, 2021-Dec-08 — /Travel PR News/ — The Columbus Zoo and Aquarium is proud to name Rick Hudson as the recipient of the Zoo’s 2021 Commitment to Conservation Award. Hudson is highly regarded in the wildlife conservation community through his work benefiting endangered turtles, tortoises, and iguanas.

Renowned for his passion and dedication for protecting the future of wildlife, Hudson, a native of Stuart, Va., is a leading expert in the field of herpetology (the study of reptiles and amphibians). He is the founder and Executive Director of the International Iguana Foundation, which seeks to ensure the survival of iguana species through critical recovery and conservation initiatives. Hudson also played a fundamental role in the founding of the Turtle Survival Alliance (TSA) in 2001 in response to the rampant and unsustainable harvest of Asian turtle populations to supply markets. Since its formation, TSA has become recognized as a global force for turtle conservation, and Hudson currently serves as president of TSA’s Board of Directors. Hudson was also instrumental in establishing the Turtle Survival Center, which is operated by TSA near Charleston, S.C. The Center develops assurance colonies of turtle and tortoise species listed as critically endangered by the International Union for Conservation of Nature (IUCN) and that are dependent on conservation breeding and management for survival—including species that no longer exist in their native ranges. Additionally, Hudson has worked at the Fort Worth Zoo for the past 41 years—21 of which has been in the facility’s conservation and science department.

The Columbus Zoo has provided support to Hudson’s worldwide conservation work since 1999 with a total of 49 grants. In addition to some grants that the Zoo awarded as annual donations, other grants that the Zoo provided were for specific projects, including emergency funds. The species that benefited from these grants face daunting conservation challenges, primarily due to the illegal wildlife trade (either for commercial pet markets, food, or traditional medicine), habitat loss, predation by invasive species, and other serious threats. Another concerning conservation challenge is the limitations on capacity for protection (managing rescue facilities, control of poaching, effective conservation strategies, etc.) in some of the species’ native ranges. Working in 18 countries and throughout the Caribbean, Hudson’s projects have successfully addressed many of these issues over the years.

“Whether he was working on the recovery of the endangered Jamaican iguana population through head start and reintroduction programs, helping to rescue radiated tortoises from a massive confiscation in Madagascar, or establishing assurance populations of imperiled species in range countries, Rick’s work has made a profound conservation impact. Rick embodies the drive, heart, and spirit of collaboration that aligns with the Columbus Zoo and Aquarium’s values as a global leader in wildlife conservation. Those traits, along with tremendous example he sets for future conservationists, is why we are proud to recognize Rick with the Columbus Zoo’s 2021 Commitment to Conservation Award,” said Tom Schmid, President and CEO of the Columbus Zoo and Aquarium.

“I am deeply honored and grateful to receive this award, which will go a long way in continuing to make a positive difference for these species that are so deserving of our help. The Columbus Zoo has stood behind me for over 20 years, and with their help and support, we have faced some pretty serious wildlife crises together. It has been an incredible conservation partnership, and our long-term collaboration and shared commitment to assuring that these species are around for generations to come makes this award just that much more special,” said Hudson.

Hudson will be the fifth recipient of the Zoo’s Commitment to Conservation Award. The previous recipients are: Claudine Andre, Lola Ya Bonobo founder, who established a sanctuary for bonobos in Kinshasa Province, Democratic Republic of Congo; Marc Ancrenaz, co-founder of the Kinabatangan Orangutan Conservation Program (KOCP) based in Borneo, who works to raise awareness about the orangutan and the importance of protecting the species’ habitat; Dr. Patrícia Medici, the founder of the Lowland Tapir Conservation Initiative (LTCI; IPÊ – Instituto de Pesquisas Ecológicas, Institute for Ecological Research) in Brazil, who helped discover the vital role tapirs play in the ecosystems they inhabit; and Dr. Karen Eckert, executive director of the Wider Caribbean Sea Turtle Conservation Network (WIDECAST) which embraces the largest network of sea turtle research and conservation projects in the world.

Hudson will receive the 2021 award funds this month. A formal presentation and acceptance will take place at the Zoo’s 2022 conservation fundraiser event, Wine for Wildlife, on May 14. Proceeds from this premier fundraising event support the Zoo’s conservation efforts and partner projects locally and globally.

About the Columbus Zoo and Aquarium