JERSEY, 2014-9-24 — /Travel PR News/ — There was excitement and delight last night as The Atlantic Hotel learnt that it had retained its highly prized AA Four Red Star and AA Four Rosette ratings, confirming its position as one of the very best establishments in the UK and Ireland.  It was great news all round, as sister restaurant Mark Jordan at the Beach also secured Two AA Rosettes for the third year in a row.

Attended by world-renowned chefs, prominent hoteliers and restaurateurs, the AA Hospitality Awards is a highlight in the industry calendar. Over the course of the evening, the event recognises and rewards the excellent service provided by the very finest establishments. Following a champagne reception, this year guests enjoyed a fabulous gourmet dinner created by Tom Kerridge, current AA Chefs’ Chef of the year.

The Atlantic Hotel’s Ocean Restaurant is one of very few hotel restaurants to be honoured with four AA Rosettes or above and its commitment to all round excellence is demonstrated by the fact that it is one of only a handful in the country to have received the dual award of four AA Red Stars and four AA Rosettes.

“We are absolutely delighted that the dedication of our team and their commitment to excellence in all that they do has been recognised once again by the AA. It is a great honour for us to be part of an exclusive group of establishments which hold the coveted dual award of four AA Red Stars and four AA Rosettes. The fact that our sister restaurant Mark Jordan at the Beach has also been recognised for excellence means that collectively we have won an impressive six rosettes for the island of Jersey.” 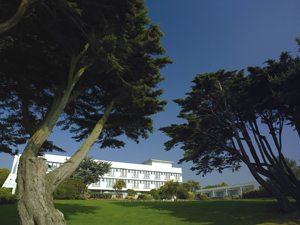