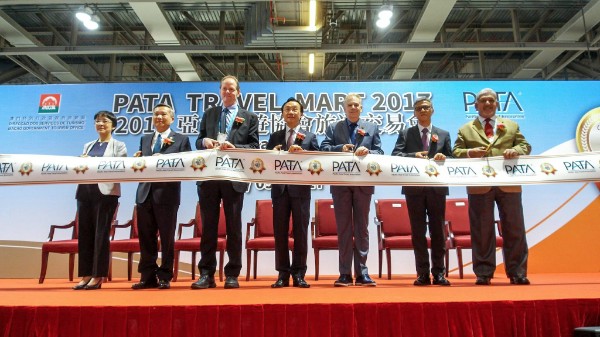 PATA CEO Dr. Mario Hardy paid tribute to warm and sincere welcome offered to all delegates by the host city. “It was very recently that Macao was hit hard by Typhoon Hato and, while recovery works are continuing, the city’s return to normality and amazing welcome is testament to the resilience of its people.”

MGTO Director Ms Maria Helena de Senna Fernandes said, “Each year, PATA Travel Mart helps to bring to the limelight the host destination, and for this edition Macao is excited to take the opportunity to show our new tourism attractions that have come into operation since we last met in our city in 2010.

“As Macao welcomes PATA Travel Mart 2017, its 40th edition, we are encouraged that, together with MGTO, around 30 of our local tourism operators are participating at the travel mart, and taking advantage of PATA’s valuable network to engage with their counterparts from the Asia Pacific and beyond. On the other hand, we are glad to see our next generation of tourism professionals involved in the travel mart through PATA Youth Symposium, hosted by the Institute for Tourism Studies, and by contributing as volunteers at the event.”

PTM 2017 also welcomed the SheTrades Pavilion hosted by the International Trade Centre (ITC). SheTrades, a flagship initiative of ITC, provides women entrepreneurs around the world with a unique network and platform to connect to international markets.

At the opening ceremony, Dr. Tam remarked that, “There is a fierce global competition in the travel and tourism market nowadays. However, the significant number of participants in PATA Travel Mart indicates the high interest of the global tourism industry in the region. The 40th anniversary of the event this year will mark an important milestone and consolidate PATA as a leading international tourism leader in Asia Pacific. With the changing face of tourism, I encourage PATA members to focus on delivering the best opportunities and working to build this important global industry together.”

Alexis Tam also noted that, “blessed with the tremendous growth-by-tourism windfalls in the last decade, Macao is poised to chart a course to the next level of developing into the World Centre of Tourism and Leisure. On one hand, we are committed to broadening our tourism offerings and diversifying visitor source markets. On the other, we value education and training as a sustainable way to improve industry standards and service quality. In Macao, we have long fostered an efficient public and private sector co-operation in the tourism industry. The collaborative link is important in promoting initiatives as well as tackling problems by stakeholders engaged in a system, in times of good and when times are bad. A very recent example we have here. After Macao was hit by the strongest typhoon in recorded history last month, tourism department and the travel industries communicate and collaborate to minimize the setbacks and ensure the competitiveness of our tourism market.”

Addressing a media briefing at the Venetian Macao Resort Hotel, the official venue for the event, later that morning, Dr. Hardy observed, “As we come together for the 40th edition of PATA Travel Mart it is only fitting that we can mark this occasion with such a strong partner as MGTO which has been an invaluable member since 1958. From sponsoring the PATA Gold Awards for the past 22 years to hosting the PATA Annual Conference in 2005 and PATA Travel Mart in 2010, MGTO is a constant and highly valued contributor towards PATA’s mission to promote the responsible development of travel and tourism to, from and within the Asia Pacific region.”

Presentations from both forums will be available at www.PATA.org/ptm-2017.

About PATA
Founded in 1951, PATA is a not-for-profit membership association that acts a catalyst for the responsible development of travel and tourism to, from and within the Asia Pacific region. The Association provides aligned advocacy, insightful research and innovative events to its member organisations, comprising 95 government, state and city tourism bodies, 25 international airlines and airports, 108 hospitality organisations, 72 educational institutions, and hundreds of travel industry companies in Asia Pacific and beyond. Thousands of travel professionals belong to the 36 local PATA chapters worldwide. The chapters organise travel industry training and business development events. Their grassroots activism underpins PATA’s membership of the Global Travel Association Coalition (GTAC), which includes ACI, CLIA, IATA, ICAO, WEF, UNWTO and the WTTC. The PATAmPOWER platform delivers unrivalled data, forecasts and insights from the PATA Strategic Intelligence Centre to members’ desktops and mobile devices anywhere in the world. PATA’s Head Office has been in Bangkok since 1998. The Association also has official offices or representation in Beijing, Sydney and London.