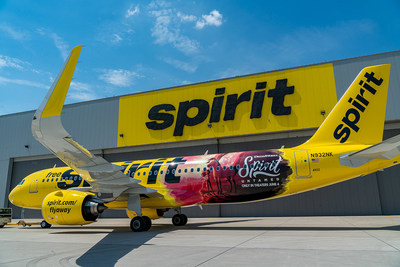 Guests can enter the Free Spirit Flyaway promotion for a chance to win a trip to Universal Orlando Resort in Orlando, Fla.

MIRAMAR, Fla., 2021-May-21 — /Travel PR News/ — A headstrong girl named Lucky and a wild Mustang named Spirit are soaring sky high and you can spot both of them at an airport near you thanks to Spirit Airlines (NYSE: SAVE), Universal Pictures, DreamWorks Animation and Universal Orlando Resort. Today (May 20, 2021), Spirit Airlines unveiled a plane featuring two unique designs from DreamWorks Animation’s new epic adventure, “Spirit Untamed,” which arrives in theaters June 4, 2021.

“Spirit Untamed” is the next chapter in DreamWorks Animation’s beloved franchise that began with the 2002 Oscar®-nominated film “Spirit: Stallion of the Cimarron” and includes an Emmy-winning TV series. The new film stars Isabela Merced, Marsai Martin, Mckenna Grace and Eiza González, with Oscar® winner Julianne Moore and Oscar® nominee Jake Gyllenhaal. In the film Lucky, a headstrong girl longing for a place to belong, moves to Miradero, a small town on the edge of the wide-open frontier, and discovers a kindred spirit when her life intersects with a wild horse.

“Lucky is the kind of character we admire here at Spirit Airlines,” Lania Rittenhouse, Spirit Airlines Vice President of Guest Experience & Brand said. “She meets her horse in the movie and tells him ‘It’s in your heart to run free. It’s in mine, too.’ As an airline, we give people the freedom to connect with loved ones and enrich their lives through travel. Having a girl like Lucky on the side of our plane reminds our Guests that we give them More Go so they can chase their wildest dreams.”

Lucky’s plane embarks on an epic adventure in Spirit’s Fit Fleet™ of 160 Airbus aircraft, which is among the youngest and most fuel-efficient in the skies and crisscrosses 81 destinations throughout 16 countries. Onboard, Guests will enjoy Spirit’s latest interior enhancements, including enhanced décor, seats with more usable legroom, and the airline’s popular Big Front Seat™. Plus, one of Lucky’s kindred spirits on each flight will be sitting in the Lucky Horseshoe seat and receive 1,000 Free Spirit® points along with a complimentary digital rental of “Spirit Untamed.”

The new Free Spirit® loyalty program is the fastest way to earn rewards and status.* Members are already discovering untamed opportunities to earn points on every booking, every bag and every Big Front Seat®. Plus options like Points Pooling with friends or family make it easier than ever to plan a journey like Lucky’s life-changing trip to Miradero.

Spirit Airlines continues to garner awards and recognition in 2021. The carrier is one of only three U.S. airlines listed on FORTUNE’s 2021 list of World’s Most Admired® Companies, which measures companies with the strongest reputation within their industries. Spirit is a Gold Stevie® Award winner for its groundbreaking self-bag drop system with biometric photo matching, which speeds the check-in process and reduces face-to-face contact. The company earned “Platinum” status in the Airline Passenger Experience Association (APEX) Health Safety initiative powered by SimpliFlying. Additionally, WalletHub recently named Spirit “Most Affordable Airline” in their 2021 Best Airlines awards and ranked Spirit third out of 11 in the overall rankings.

Spirit’s commitment to Safe Travels includes a multi-layered safety approach that requires all Guests and Team Members to wear face coverings. Each Guest agrees to that policy as part of a health and safety acknowledgement prior to boarding the aircraft. Every plane in our Fit Fleet® uses state-of-the-art, high-efficiency particulate air (HEPA) filters that capture 99.97% of particles and filter the air for contaminants every 3 minutes.

Between each flight, enhanced cleaning procedures focus on high-touch areas such as tray tables and armrests. Spirit also uses two EPA-registered fogging treatments. The first applies a safe, high-grade disinfectant that’s effective against coronaviruses. The second uses an antimicrobial product that forms an invisible barrier on all surfaces that kills bacteria and viruses on contact for 30 days. Please visit Spirit’s COVID-19 Information Center for more information on safety enhancements.

Spirit Airlines (NYSE: SAVE) is committed to delivering the best value in the sky. We are the leader in providing customizable travel options starting with an unbundled fare. This allows our Guests to pay only for the options they choose — like bags, seat assignments and refreshments — something we call Á La Smarte. We make it possible for our Guests to venture further and discover more than ever before. Our Fit Fleet® is one of the youngest and most fuel-efficient in the U.S. We serve destinations throughout the U.S., Latin America and the Caribbean, and are dedicated to giving back and improving those communities. Come save with us at spirit.com.

An epic adventure about a headstrong girl longing for a place to belong who discovers a kindred spirit when her life intersects with a wild horse, Spirit Untamed is the next chapter in the beloved story from DreamWorks Animation.

Like her mother, Lucky isn’t exactly a fan of rules and restrictions, which has caused her Aunt Cora (Academy Award® winner Julianne Moore) no small amount of worry. Lucky has grown up in an East Coast city under Cora’s watchful eye, but when Lucky presses her own luck with one too many risky escapades, Cora picks up stakes and moves them both back with Lucky’s father, Jim (Oscar® nominee Jake Gyllenhaal), in Miradero.

When a heartless horse wrangler (Emmy nominee Walton Goggins, FX’s Justified) and his team plan to capture Spirit and his herd and auction them off to a life of captivity and hard labor, Lucky enlists her new friends and bravely embarks on the adventure of a lifetime to rescue the horse who has given her freedom and a sense of purpose, and has helped Lucky discover a connection to her mother’s legacy and to her Mexican heritage that she never expected.