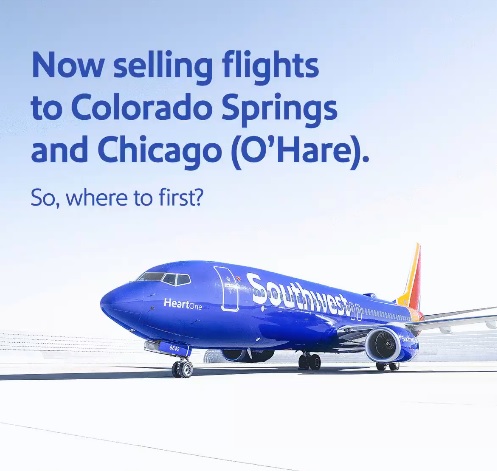 “Our low fares and friendly policies, like no change fees* and bags fly free**, mean more today as they give people the peace of mind to book travel beyond 2020. We’re growing the reach of Southwest as we add more destinations across the United States while bringing our warm Hospitality and iconic Customer Service to more people than ever before,” said Andrew Watterson, Southwest Airlines Chief Commercial Officer and Executive Vice President. “These additional investments in Chicago and Colorado provide even more convenience for our current Customers while also making it more convenient for new travelers to choose Southwest as we begin service from their preferred airport.”

More than 35 years after landing at Chicago Midway International Airport, Southwest will expand its footprint in the Chicagoland area, adding complementing service from Chicago O’Hare International Airport starting Feb. 14, 2021. The carrier’s initial service will offer 20 departures daily from O’Hare, and the new service is available for purchase at Southwest.com with fares as low as:

The number of seats, days of week, and markets for these fares are limited. See full fares, and specific terms and conditions below and at Southwest.com.

During its more than three-decades of service to Chicago, Southwest has grown to become Chicago Midway’s largest airline while also employing more than 4,800 People in the city.

Southwest will also launch service from its fourth destination in Colorado when it takes off from Colorado Springs Municipal Airport on March 11, 2021. The new service links the Pikes Peak region nonstop with up to 13 flights a day to destinations across Southwest’s growing network. The new service is available now at Southwest.com with fares as low as:

The number of seats, days of week, and markets for these fares are limited. See full fares, and specific terms and conditions below and at Southwest.com.

Southwest continues growing across Colorado with new seasonal service to both Montrose (Telluride) and Steamboat Springs (Hayden) beginning Dec. 19, 2020. Just a few weeks later, on Jan. 3, 2021, Southwest will celebrate its 15th anniversary of service to Denver where it now employs more than 4,000 People and currently offers up to 220 nonstop departures per day during peak travel periods.

Southwest is also preparing to begin service to Palm Springs and Miami beginning on Nov. 15. These flights, along with the carrier’s full flight schedule through April 11, 2021, are available for sale at Southwest.com.

Additionally, the carrier recently announced plans to add service from Houston George Bush Intercontinental; Savannah, Georgia; and return to Jackson, Mississippi, with flights anticipated to begin in the first half of 2021. More information about fares and schedules will be released when available.

Purchase today through Nov. 4, 2020, 11:59 p.m. Central Time. Chicago (O’Hare), IL travel valid Feb. 14, 2021, through April 11, 2021. Colorado Springs, CO travel valid March 11, 2021, through April 11, 2021. Except as otherwise specified, continental U.S. travel is not valid on Fridays and Sundays. Travel from Colorado Springs, CO to Las Vegas, NV is valid only on Sundays through Wednesdays. Travel to Colorado Springs, CO from Las Vegas, NV is valid only on Tuesdays through Fridays. Fares valid on nonstop service where indicated; if not indicated, fares are valid on single connecting service. Displayed prices include all U.S. and international government taxes and fees. Points bookings do not include taxes, fees, and other government/airport charges of at least $5.60 per one-way flight. Fares not available to/from continental U.S. to/from Hawaii. Seats and days are limited. Fares may vary by destination, flight, and day of week and won’t be available on some flights that operate during very busy travel times and holiday periods. Travel is available for one-way Wanna Get Away® fares. Fares may be combined with other Southwest Airlines® combinable fares. If combining with other fares, the most restrictive fare’s rules apply. Sale fares may be available on other days of week, but that’s not guaranteed. Fares are nonrefundable but may be applied toward future travel on Southwest Airlines, as long as reservations are canceled at least ten minutes prior to the scheduled departure. Failure to cancel prior to departure will result in forfeiture of remaining funds on the reservation. Any change in itinerary may result in an increase in fare. Standby travel may require an upgrade to the Anytime fare depending on Rapid Rewards® tier status. Fares are subject to change until ticketed. Offer applies only to published, scheduled service.

In its 50th year of service, Dallas-based Southwest Airlines Co. continues to differentiate itself from other air carriers with exemplary Customer Service to a Customer base topping 130 million passengers in 2019. Southwest became the nation’s largest domestic air carrier in 2003 and maintains that ranking based on the U.S. Department of Transportation’s most recent reporting of domestic originating passengers boarded. In peak travel seasons during 2019, Southwest operated more than 4,000 weekday departures among a network of 101 destinations in the United States and 10 additional countries. In early 2020, the carrier added service to Hilo, Hawaii, and Cozumel, Mexico.

The carrier issued its Southwest® Promise in May 2020 to highlight new and round-the-clock efforts to support its Customers and Employees wellbeing and comfort. Among the changes are enhanced cleaning efforts at airports and onboard aircraft and face covering requirements for Customers and Employees. Additional details about the Southwest Promise are available at Southwest.com/Promise.