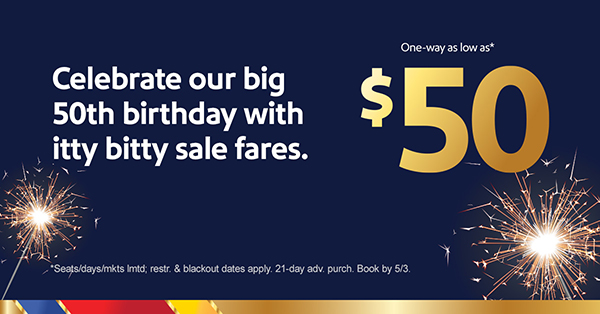 Wanna Get Away®? Take a walk on the beach or travel off the beaten path; whatever the adventure looks like, Southwest is ready to take Customers to the places they love to explore. Customers who take advantage of this sale can head to one of their favorite vacation destinations. With low fares, a growing network, and flexible policies (including no cancellation fees, no change fees, and bags fly free®**), Customers are in for an “awe5ome” adventure.

Seats, days, and markets are limited. Blackout dates and 21-day advance purchase requirements apply. See a full list of fares, fare rules, and terms and conditions below and at Southwest.com.

These $50 fares, throughout the carrier’s published flight schedule now open through Nov. 5, 2021, can be purchased at Southwest.com.

Southwest’s low-cost model has encouraged fare competition in local markets for five decades. U.S. Department of Transportation (DOT) researchers officially turned their focus to studying the phenomenon, naming it The Southwest Effect in 1993. Their research found when Southwest enters a market, fares drop and overall passenger traffic increases. At a time when air travel in the United States was dominated by legacy carriers, Southwest was disrupting the status quo on a consistent basis. The Southwest Effect remains a phenomenon as the Southwest Heart continues to grow.

Wanna get up to 5,000 points closer to your next adventure?
Don’t let those points fly away! Join Rapid Rewards® today, then book and fly two round trips or four one-way trips from April 1, 2021, through May 31, 2021, to earn 5,000 bonus points.* Southwest’s award-winning Rapid Rewards program makes it easy to earn points that can be redeemed for travel anywhere Southwest flies. And, Rapid Reward points never expire. Learn more by visiting Southwest.com/RapidRewards

**At Southwest Airlines, there are no change fees (fare difference may apply), no cancel fees (failure to cancel a reservation at least 10 minutes prior to scheduled departure may result in forfeited travel funds), and bags fly free (first and second checked bags, weight and size limits apply).

In its 50th year of service, Dallas-based  Southwest Airlines Co. continues to differentiate itself from other air carriers with exemplary Customer Service delivered by more than 56,000 Employees to a Customer base that topped 130 million Passengers in 2019. Southwest has a robust network of point-to-point service with a strong presence across top leisure and business markets. In peak travel seasons during 2019, Southwest operated more than 4,000 weekday departures among a network of 101 destinations in the United States and 10 additional countries. In 2020, the carrier added service to Hilo, Hawaii; Cozumel, Mexico; Miami; Palm Springs, Calif.; Steamboat Springs; and Montrose (Telluride), Colo. Thus far in 2021, Southwest has initiated service to both Chicago (O’Hare) and Sarasota/Bradenton on Feb. 14; as well as both Savannah/Hilton Head and Colorado Springs on March 11; and Houston (Bush) and Santa Barbara, Calif. on April 12; and will begin service to Fresno, Calif. on April 25; Destin/Ft. Walton Beach on May 6; Myrtle Beach, S.C. on May 23; Bozeman, Mont. on May 27; and Jackson, Miss. on June 6. The Company has also announced an intention to initiate new service to \ Eugene, Ore.; and Bellingham, Wash., later this year.