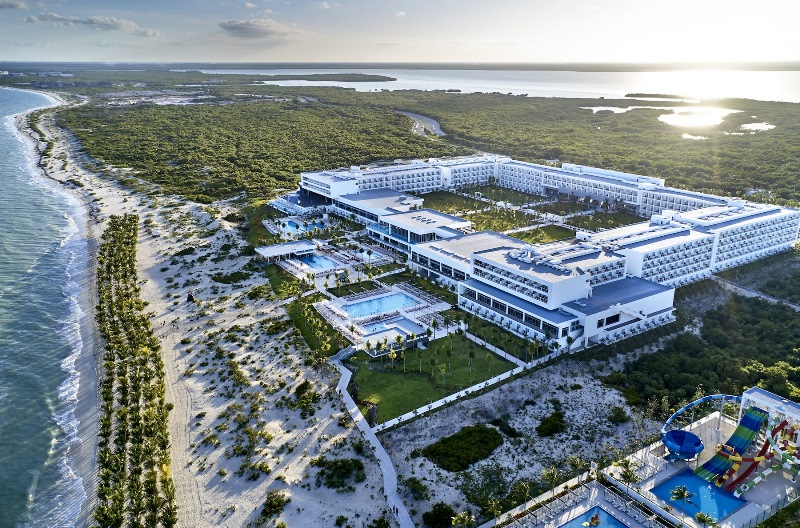 Mallorca, Spain, 2018-Dec-04 — /Travel PR News/ — RIU Hotels & Resorts has now opened Riu Palace Costa Mujeres, introducing with it a new architectural concept. The innovative layout of its bars and restaurants allows guests to enjoy spectacular views of the sea. It is the international hotel chain’s nineteenth hotel in Mexico and its second in Costa Mujeres, following the opening of Riu Dunamar in this new paradise destination in December 2017.

Luis Riu, CEO of RIU Hotels & Resorts, explains that one of the new hotel’s standout features is the innovative layout of its restaurants, bars and square on the upper floors of the complex, which provides them with direct views over the sea, the hotel’s pools and gardens and the large beach. This breaks away from the more conventional layout of having all the shared areas and services on the ground floor. “With this new hotel, we wanted to fulfil a wish expressed by some of our most loyal customers: to have clear views of the Caribbean while they enjoy food and cocktails. To do this, the building has been designed in an innovative way, creating terraces, dining rooms and cosy corners on the first floor to improve our guests’ experience.”

Luis Riu is passionate about architecture and, in these new projects, he and his team of architects are driving innovative concepts that seek to make the best possible use of each new hotel’s location and to surprise guests with pioneering new services. All this, whilst never failing to strive for excellence in operations and always allowing innovation to bring improvements to the daily work of every hotel employee, because greater efficiency leads to a better service. The next example of this new trend will be Riu Palace Baja California, which opens its doors on 1 December this year and which will impress guests with its originality and sophistication.

The new Riu Palace Costa Mujeres, part of the Riu Palace line, is located by the beach of Bahía de Mujeres, a spectacular stretch of white sand and crystalline waters around 30 km north of Cancún’s hotel district. Its strategic yet little-known location also lets guests explore some of the region’s most iconic places, such as the Isla Mujeres turtle conservation centre, the pre-Mayan ruins of El Meco and the archaeological remains found at El Rey.

This completes the chain’s range in the destination with a new, luxury hotel category, which offers an all-inclusive service and 24-hour room service. It also provides free WiFi throughout the hotel and top-of-the-range services in each of its 670 rooms which are decorated in light hues, and in the open areas which overlook the sea.

Riu Palace Costa Mujeres offers open and modern communal areas where guests can relax in intimate surroundings, lively entertainment programs and a wide range of cuisine including breakfast buffets and show-cooking stations in its main restaurant, “Spaces”. Magnificent grilled meats are on the menu in the pool restaurant, “Tastes”, as well as Mexican, Japanese, Italian and fusion cuisine in the themed restaurants, “Zarape”, “Japan”, “Roma” and “Krystal”, which turn the hotel guests’ stays into true foodie experiences.

The new hotel has five pools, two of which have swim-up bars, and a reserved area on the beach with lounge chairs and umbrellas. The newly-built hotel also offers varied entertainment programs for adults, sports activities with RiuFit and art with RiuArt, as well as live shows, a gym and a spa. Its location next to Riu Dunamar means guests can enjoy Pacha nightclub, RiuLand kids’ club and Splash Water World, a water park with thrilling slides.

RIU Hotels’ great commitment to Mexico dates back to 1997, the year that Riu Yucatan opened in Playa del Carmen. Since then, new hotels have opened year after year, up to today and the launch of the chain’s nineteenth hotel, Riu Palace Costa Mujeres. With this new launch, the hotel chain now offers nearly 11,000 rooms in Playa del Carmen (6), Cancún (4), Costa Mujeres (2), Los Cabos (2), Riviera Nayarit (3), Mazatlán (1) and Guadalajara (1). This year will end with the opening of Riu Palace Baja California in Los Cabos, scheduled for December 2018, and it will be the company’s twentieth hotel in Mexico.

The RIU Group has an ambitious expansion plan for the next five years, with a strong commitment to new destinations, especially in Asia and Africa, and large global cities where it plans to open Riu Plaza urban hotels. The hotel chain, which goes back more than 65 years, is characterised by its strong commitment to the destinations where it settles, investing in long-term projects that involve the local community through its purchasing, employment and sustainability policies. RIU is also making a big investment in the development and improvement of an increasingly sustainable operation, and all of its projects are guided by respect for the environments and the local culture and environment.

About RIU: The international RIU chain was founded in Mallorca by the Riu family in 1953 as a small holiday firm and is still owned by the family’s third generation. The company specialises in holiday resorts and over 70% of its establishments offer its acclaimed All Inclusive by RIU service. With the inauguration of its first city hotel in 2010, RIU is expanding its range of products with its own line of city hotels called Riu Plaza. RIU Hotels & Resorts now has 92 hotels in 19 countries which welcome over 4 million guests a year and provide jobs for a total of 28,894 employees. RIU is currently the world’s 34th ranked chain, one of the Caribbean’s most popular, the third largest in Spain in terms of revenue and the fourth largest in number of rooms.