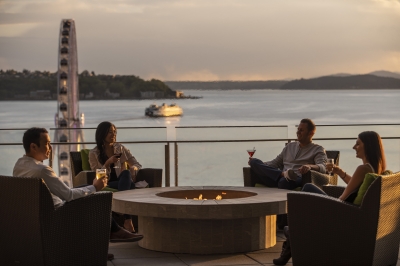 The online site is a global authority in rankings, consumer advice and information and the “Gold Hotel” badge represents the top 10 percent of all ranked luxury hotels in the United States – an award the Hotel has won since the U.S. News & World Report began the annual awards.

“We are honoured to be the #1 hotel in Seattle and the state. It is a testament to the passion and dedication of the team to provide one-of-a-kind experiences for our guests,” says Angelica Palladino, General Manager of Four Seasons Hotel Seattle.

The Spa at Four Seasons Hotel Seattle was also recognised in the category of Best Spa Hotels; and the Hotel ranked in Best Wedding Hotels, and Best Business Hotels.

The methodology considers a hotel’s star rating and both expert and guest sentiment by collecting annual awards from distinguished travel publications and TripAdvisor user scores, the combination of which helps determine each hotel’s rank.

Forbes was cited as saying that “the service is top-notch and attentive goes without saying — staff here attends to whatever you need with a laid-back, friendly and confident flair that’s hard to duplicate.”

The Hotel’s proximity to Pike Place Market, Seattle Art Museum and other iconic attractions, not to mention the views of Elliott Bay from the guest rooms, were also highlighted as part of the reason travellers selected the Hotel when travelling to the Emerald City.

“From the modern Northwest-inspired design to the posh spa and infinity-edge pool, the Hotel, which occupies the first 10 floors of a 21-storey residential high-rise, offers an ultra-luxurious Seattle experience,” cited Fodors.