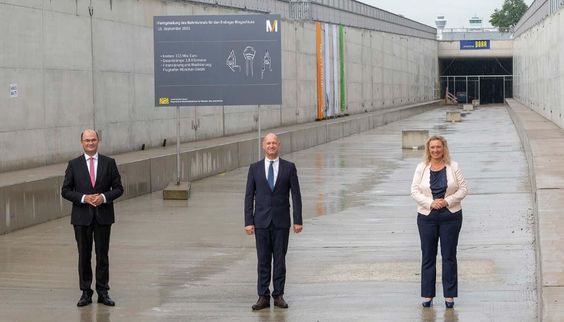 COLOGNE, Germany, 2021-Sep-17 — /Travel PR News/ — Three years after the official groundbreaking ceremony for the extension of the rail tunnel at Munich Airport, which will provide a link for rail traffic between Freising and Erding running via the airport, the shell has now been completed on schedule. The tunnel already in place, which ended at the Terminal 2 satellite building, has been extended eastward to allow trains and S-Bahn light rail services to pass through the airport. Munich Airport is spending a total of EUR 115 million on the construction work, which has now finished. This morning, Albert Füracker, the Bavarian finance minister and also chairman of the Munich Airport Supervisory Board, Bavarian transport minister Kerstin Schreyer and Munich Airport CEO Jost Lammers visited the completed tunnel shell, which represents a key contribution by Munich Airport to the construction of the Erding loop.

The new section of track is approximately 1.8 kilometers long, comprising the 1,500-meter tunnel extension and a ramp structure measuring roughly 300 meters, which will take trains back to the surface. At 61,000 square meters, the excavation covered around the same total area as five soccer fields. During construction, 390,000 cubic meters of soil (around 26,000 truckloads) were shifted and roughly 150,000 cubic meters of concrete installed. Approximately 16,000 metric tons of reinforcing steel were used to build the tunnel, amounting to one and a half times the weight of the Eiffel Tower.

DB Netz AG can now move in to fit the tunnel shell with all the equipment necessary for rail services to operate. Deutsche Bahn is also responsible for building the next section of the route, which will be roughly two kilometers long and will run via the Schwaigerloh stop to the new sidings and turnaround area. The new section of track up to this classification yard is then expected to be available for use starting at the end of 2025.

“This rail tunnel is a real investment in the future, and one that Munich Airport is using to promote intermodal transportation using Munich as a hub. The rail tunnel extension is essential to enable the direct rail link from Freising to Erding via the airport. Thanks to the rapid implementation by Munich Airport, this important section of the Erding loop is now complete,” said Bavarian finance minister Albert Füracker, who is the chairman of the Munich Airport Supervisory Board. Füracker continued, “The project takes the airport’s ambitious climate targets into account. In addition to numerous specific measures around the airport, the improvements to the way that aviation and rail transportation interact will be another crucial part of cutting carbon emissions.”

Bavarian transport minister Kerstin Schreyer added, “I’m pleased to see that the rail link at Munich Airport is gradually getting better. The rail tunnel extension is a key project as part of upgrades to the airport station and subsequently completing the loop to Erding and southeastern Bavaria. The section as far as the Schwaigerloh sidings and turnaround area alone will make the S-Bahn and regional rail services more punctual, and we’re creating capacity for more trains to the airport.”

Airport CEO Jost Lammers referred to “the proverbial light at the end of the tunnel” when considering the prospects that the Erding loop offers the airport. “Improved connections between Munich Airport and the rail network are absolutely pivotal to the future development of Munich Airport. They will be good for passenger convenience as well as for combating climate change. The more travelers arrive at our airport by train, the lower the harmful emissions produced by feeder traffic,” said Lammers.