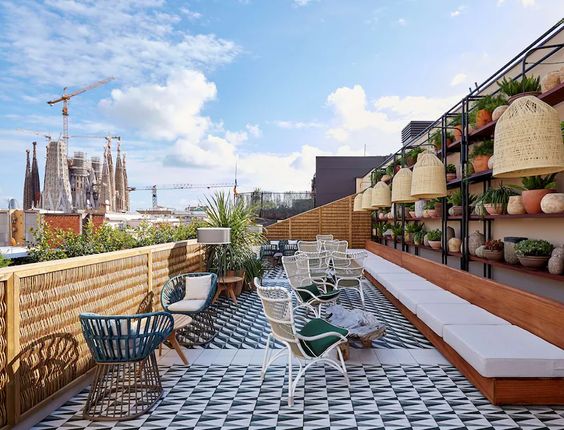 Brussels/Barcelona, 2022-Jun-02 — /Travel PR News/ — Radisson Hotel Group is proud to announce the opening of the Radisson Blu 1882 Hotel, Barcelona Sagrada Familia, which marks another step forward in Radisson Hotel Group’s plans to expand in Spain and continue strengthening its presence in the country.

A mere 450 meters away from the Sagrada Familia, the most-visited monument in Spain, the renovated Radisson Blu 1882 Hotel, Barcelona Sagrada Familia is now ready to welcome guests to its enviable location in the Gràcia district. This hotel’s location provides excellent connections to the city center, Passeig de Gràcia and Plaça de Catalunya. It is also just two kilometers away from Parc Güell, another very popular tourist attraction bearing Antoni Gaudí’s unmistakable imprint.

Radisson Blu 1882 Hotel, Barcelona Sagrada Familia has 182 rooms, which include standard, superior, premium, premium deluxe, and family rooms. The rooftop, El Cel Bar terrace and pool are the perfect place to relax after a long day of sightseeing or business meetings. It offers spectacular views of the city’s skyline and extraordinary views of the Sagrada Familia and Antoni Gaudí’s fascinating architecture.

The philosophy of Radisson Blu 1882 Hotel, Barcelona Sagrada Familia, is to offer sustainable, balanced, and healthy gastronomy across its four restaurants and bars, including Restaurant El Bosc, El Bosc Terrace Bar, Bobò Bar, and El Cel Bar. Guests wishing to maintain their exercise regime are catered for thanks to the hotel’s fitness center.

“It’s a privilege to introduce the Radisson Blu brand to Barcelona, one of the world’s most vibrant cities.  The hotel’s unbelievable location with panoramic views from its rooftop terrace make this hotel a unique place to stay and explore the city. It’s a modern hotel with lots of style and a cozy and cosmopolitan feel,” says Tom Flanagan Karttunen, Area Senior Vice President Northern & Western Europe, Radisson Hotel Group.

As Barcelona is one of Spain’s major business centers, this new hotel has 120 square meters of corporate meeting and event space with the capacity to host up to 120 people, as well as 64 underground parking spaces for guests.

The Radisson Blu 1882 Hotel, Barcelona Sagrada Familia has also earned LEED (Leadership in Energy and Environmental Design) certification as a Gold Green Building, a factor that makes it the perfect option for the environmentally conscious traveler. The hotel is home to more than 4000 plants, including an 80m² vertical ecosystem of more than 3000 plants in the El Bosc Terrace Bar that can filter 10kg of dust per year and generate oxygen for 80 people.  Furthermore, the hotel has Biosphere certification and a dedicated CSR neighborhood project commitment.

The interiors of the common areas in the new Radisson Blu 1882 Hotel, Barcelona Sagrada Familia were created by renowned interior designer Lázaro Rosa-Violán. Urban in style, its design has a contemporary aesthetic featuring special designer pieces with a more modern flair. Rosa-Violán envisioned creating a cozy and comfortable environment for guests with natural leather upholstery and high-pile rugs, which were accented by lush leafy greenery, bringing the outdoors indoors, which is a signature design element of Rosa-Violán. The color palette highlights the shades used in some of the furniture upholstery as well as the colors used at certain points in the decorative elements. Likewise, the hotel’s interior design concept also showcases other more striking pieces, giving them an almost monumental air, which allows them to stand out in the overall decorating scheme.

Lázaro Rosa-Violán shares, “It has been an honor to collaborate on a project like this, located in such a unique area of Barcelona near the city’s most iconic monument, the Sagrada Familia, which can be admired from the hotel’s rooftop terrace, and which has also earned Gold level LEED certification for sustainability.”

With the health and safety of guests and team members as its top priority, Radisson Blu 1882 Hotel, Barcelona Sagrada Familia is implementing the Radisson Hotels Safety Protocol program. The in-depth cleanliness and disinfection protocols were developed in partnership with SGS, the world’s leading inspection, verification, testing and certification company, and are designed to ensure guest safety and peace of mind from check-in to check-out.