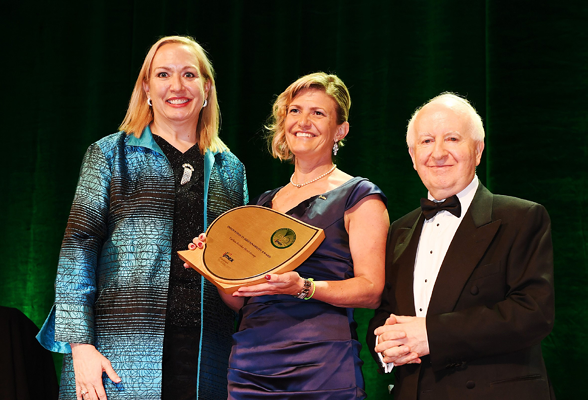 BRUSSELS, Belgium, 2017-May-19 — /Travel PR News/ — Radisson Blu is the proud winner of the 2017 IMEX-GMIC Innovation in Sustainability Award with its Blu Planet program, the responsible business initiative of Radisson Blu hotels around the world.

“We are determined to help protect the Earth’s priceless water supply. We launched Blu Planet to conserve water and help bring safe drinking water and sanitation to communities in need,” says Inge Huijbrechts, Vice President of Responsible Business for the Carlson Rezidor Hotel Group. “Blu Planet is a key pillar of our group’s Responsible Business program and our hotels’ contribution to UN Sustainable Development Goal number 6. Winning the IMEX-GMIC award is a great recognition of our hotels’ engagement and our partnership with Just a Drop.”

“Water covers 71% of Earth, but only 1% of it is actually potable,” says Huijbrechts. “Experts predict that, by 2025, more than half the world’s population will become vulnerable due to safe water scarcity. The tourism and hospitality sectors consume substantial amounts of water. Radisson Blu and Carlson Rezidor Hotel Group are extremely mindful and have reduced their water consumption by 29% since 2007. The company’s ambition is to reduce litres consumed per guest, per night by another 10% by the end of 2020, without compromising guest experience or comfort.”

Radisson Blu Hotels & Resorts have encouraged its guests to reuse close to 2 million towels since the launch of a new towel replacement program in 2015, in partnership with Just a Drop. The program aims to provide clean drinking water for life for more than 10,000 children in India, Kenya and Peru. Radisson Blu has also helped recycle and distribute an estimated 66 tons of soap waste in support of Soap for Hope, giving free soap to communities, creating local entrepreneurs, bringing jobs to the community, and helping hotels reduce waste through recycling.

“According to UNICEF, no single intervention is more likely to reduce global poverty than the provision of safe water, and Radisson Blu is proud to positively contribute to this global commitment,” said Huijbrechts.

Carlson Rezidor Hotel Group is one of the world’s largest and most dynamic hotel companies and includes 1,440 locations in operation and under development with more than 230,000 rooms and a footprint spanning 115 countries and territories. The Carlson Rezidor portfolio includes a powerful set of global brands: Quorvus Collection, Radisson Blu, Radisson, Radisson RED, Park Plaza, Park Inn by Radisson and Country Inns & Suites By Carlson. Guests can benefit from Club CarlsonSM, a program that redefines hotel rewards with a collection of exceptional benefits, services, and privileges at more than 1,000 hotels worldwide. Over 95,000 people are employed in Carlson Rezidor Hotel Group hotel systems and the company is headquartered in Minneapolis, Singapore, and Brussels.