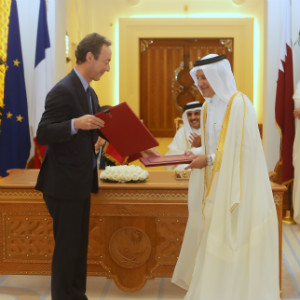 DOHA, Qatar, 2017-Dec-08 — /Travel PR News/ — Qatar Airways has reconfirmed and upsized its earlier order for 50 A320neo with a firm order instead for 50 of the larger A321neo ACF (Airbus Cabin Flex configuration), in an order signed today in the presence of His Highness Sheikh Tamim bin Hamad Al Thani, the Emir of the State of Qatar, and French President Mr. Emmanuel Macron. The order was signed by Qatar Airways Group Chief Executive, His Excellency Mr. Akbar Al Baker, and Mr. Fabrice Brégier, Airbus Chief Operating Officer and President Commercial Aircraft during the French President’s visit to Doha.

The selection of the largest member of Airbus’ single family reflects the airline’s need for efficiency and additional capacity. This updated order replaces the original one placed in 2011.

Joining Qatar Airways’ fleet of 50 A320neo from 2019 onwards, the A321neo ACF will support the continuous development of Qatar Airways’ global network leveraging from the A321neo range capability and the unprecedented customer experience. The total value of the deal is at $6.35 billion at list prices.

Qatar Airways Group Chief Executive, His Excellency Mr. Akbar Al Baker, said: “At a time when Qatar Airways is experiencing unprecedented growth and expansion, the need for efficient, reliable and modern aircraft has never been greater. To answer our need for growth and additional capacity, the A321neo ACF is a world-class choice for our passengers and for our business. Qatar Airways is the fastest growing airline in the world and with this aircraft we will operate the youngest fleet whilst delivering unprecedented comfort and services to our customers.”

Mr. Fabrice Brégier, Airbus Chief Operating Officer and President Commercial Aircraft, said: “We are pleased that a signature airline like Qatar Airways has chosen the A321neo ACF. This is an endorsement for the largest member of our single aisle family. It confirms the aircraft’s strong position as the ideal Middle of the Market airplane for the Middle East. We look forward to seeing the A321neo ACF flying in Qatar Airways colours and to contributing to the airline’s continued success and excellence.”

Qatar Airways is known for flying one of the youngest fleets in the sky and in 2015 welcomed the Airbus A350-900 into its fleet as Global Launch Customer. The airline will soon welcome the Airbus A350-1000, also as Global Launch Customer. The airline’s modern fleet was one of the reasons passengers voted it as Skytrax Airline of the Year 2017, for the fourth time.

The A321 is the largest member of the A320 Family, seating up to 240 passengers. Incorporating the latest engines, aerodynamic advances, and cabin innovations, the A321neo offers a significant reduction in fuel consumption of at least 15 per cent per seat from day one and 20 per cent by 2020.

The A321neo ACF introduces new door and fuselage enhancements, allowing airlines to make better use of the cabin space and also provide provision for more underfloor fuel capacity for up to 4,000nm transatlantic range.

The A320neo Family incorporates the very latest technologies including new generation engines and Sharklets, which together deliver at least 15 per cent fuel savings at delivery and 20 per cent by 2020. With more than 5,200 orders received from 95 customers since its launch in 2010, the A320neo Family has captured some 60 per cent share of the market. Qatar Airways proudly flies the flag of the State of Qatar to more than 150 destinations worldwide, bringing people to Doha from every corner of the globe via the award-winning, state-of-the-art Hamad International Airport (HIA).

Qatar Airways will be adding flights to many more exciting destinations to its network throughout the remainder of this year and 2018, including St. Petersburg, Russia; Canberra, Australia; and Cardiff, UK, to name just a few.