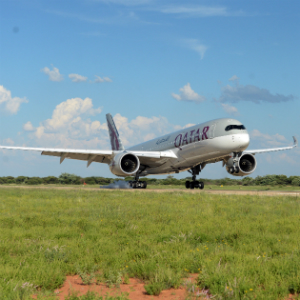 The flight was greeted upon landing by His Excellency Vice President of Botswana, Mr. Slumber Tsogwane, and the Minister of Transport and Communications, Mr. Thulagano Segokgo. The multiple award-winning airline will operate a three-times weekly service to the capital city of Botswana and is the only non-African airline to fly to the country.

Qatar Airways Group Chief Executive, His Excellency Mr. Akbar Al Baker, said: “I am delighted to add Gaborone to our global network of more than 160 destinations. Qatar Airways is committed to expanding its network in Africa, and this new route – our 23rd destination on the continent – is another step towards achieving that goal. We take great pride in being the first Middle Eastern airline to fly to Botswana and look forward to bringing tens of thousands of passengers to this wonderful country.”

Acting Chief Executive Officer and Civil Aviation Authority Botswana, Mr. Kabo Phutietsile, said: “The new route by Qatar Airways is expected to boost Botswana’s aviation industry and create employment opportunities and skills transfer for the aviation industry. It gives the country an opportunity to fully utilize and benefit from the investments in infrastructure improvement completed in the recent past.  The arrival of Qatar will further boost and grow the Aviation industry and auxiliary industries. It allows for improved connectivity between Botswana and the Qatar many established routes. The spin-offs will facilitate growth of the Botswana economy.”

The inaugural flight is Qatar Airways’ ninth new destination of the year and the third in Africa during 2019, complementing the already popular routes to Mogadishu, Somalia and Rabat, Morocco. With Luanda, Angola to follow in 2020, the airline is making good on its promise to grow throughout the continent.

The airline will operate to Gaborone with its Airbus 350-900, featuring 36 seats in Business class and 247 seats in Economy class. Passengers can enjoy the next generation interactive on-board entertainment system, Oryx One, with a choice of up to 4,000 audio and video-on-demand options as well as complimentary Wi-Fi for passengers.

Botswana is globally renowned for its unspoiled natural environment, including the Kalahari Desert and the Okavango Delta, making it popular for its safaris & other cultural tourism.