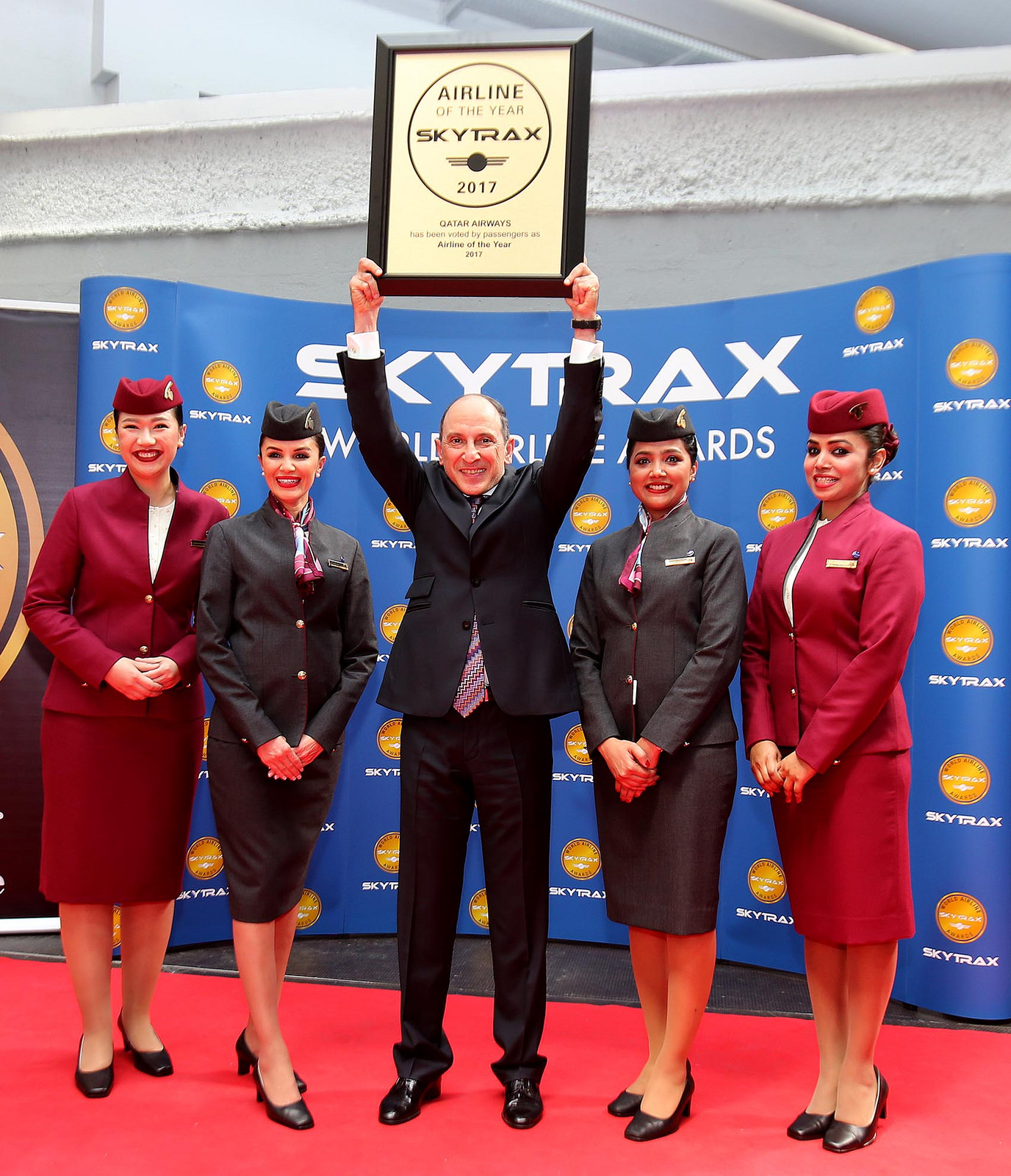 DOHA, Qatar, 2017-Dec-11 — /Travel PR News/ — It has been a record-breaking year for Qatar Airways, as the airline has claimed more global awards than ever before in its 20th year of operations. Qatar’s national carrier has received more than 50 individual awards across multiple categories since January, demonstrating its continued commitment to exceeding passenger expectations with its innovative approach to product development and dedication to customer experience.

At a time when many airlines are scaling back and during a particularly challenging year, Qatar Airways continues to thrive, showcasing its best-in-class cabins, crew, catering, in-flight entertainment, on-board magazine, lounges and more. Notably, Qatar Airways Group Chief Executive, His Excellency Mr. Akbar Al Baker, received the ‘Aviation Executive of the Year’ award from industry body CAPA last month, highlighting his leadership and innovative direction in guiding the growth of the airline and the wider aviation industry as a whole.

Leading the host of awards received by the airline this year is the prestigious accolade of 2017 ‘Airline of the Year,’ awarded by international air transport rating organisation Skytrax. Known as ‘the Oscars of the aviation industry,’ Qatar Airways was also named ‘World’s Best Business Class,’ ‘Best Airline in the Middle East,’ and ‘World’s Best First Class Airline Lounge’ at the Skytrax awards ceremony held in Paris in June.

Qatar Airways Group Chief Executive, His Excellency Mr. Akbar Al Baker, said: “The many awards Qatar Airways has received this year stand as firm recognition of our ongoing commitment to our passengers to constantly innovate in order to deliver the finest experience available, both in the skies and on the ground.

“At a time when international aviation is under greater scrutiny than ever, I am very proud that Qatar Airways continues to stand head and shoulders above its competitors. We celebrate our 20th anniversary as an airline this year, and these awards prove we will not rest on our laurels. We will continue to push industry standards to new levels, and to bring passengers an unsurpassed product that will delight and amaze them each and every time they fly.”

Significantly, Qatar Airways was also recognised for its launch of Qsuite, the airline’s revolutionary new ‘First in Business Class’ product, receiving the ‘Best Airline Innovation of the Year’ award at the 2017 ULTRAS (Ultimate Luxury Travel Related Awards) in London.

Qatar Airways was also voted ‘Best Airline’ at the 2017 Business Traveller awards held in London, where it won a raft of other major awards, including ‘Best Airline in the Middle East,’ ‘Best Business Class’ and ‘Best Long Haul Airline.’

Additionally, the carrier was awarded ‘Best Cabin Service’ and ‘Best Food and Beverage’ at the 2017 APEX Passenger Choice awards held during this year’s annual APEX Expo in Las Vegas. The airline also received the evening’s highest ranking as a five-star airline from more than half a million passengers who took part.

Qatar Airways’ in-flight magazine, Oryx, also won the ‘Custom Redesign of the Year’ award at Folio magazine’s Eddie & Ozzie awards, a ceremony which recognises excellence in editorial content and design across the magazine industry. Oryx magazine is read by more than 30 million people annually and is available on board Qatar Airways’ fleet of more than 200 aircraft, as well as on the Oryx One app and online at www.ink-live.com/emagazines/oryx

Additionally, Qatar Airways Cargo was named the ‘Global Cargo Airline of the Year’ at the Air Cargo Africa 2017 awards held earlier this year. Additionally, the cargo carrier was named ‘Overall Carrier of the Year’ at the highly anticipated Payload Asia Awards Ceremony in Singapore in October, and ‘Best Cargo Airline in Customer Services’ at the Cargo India awards held in Ahmedabad, India.

The first aircraft fully-fitted with Qsuite was launched on the Doha-London route this summer, soon followed by Paris and shortly to feature on the airline’s flights to New York and Washington. Qsuite is already fast collecting awards for offering the industry’s first-ever double bed in Business Class. Adjustable panels and movable TV monitors allow colleagues, friends or families travelling together to transform their space into a private suite, allowing them to work, dine and socialise together.

One of the world’s fastest-growing airlines, Qatar Airways recently added an array of new destinations to its extensive global route network, including Dublin, Republic of Ireland; Nice, France; Prague, Czech Republic and Kyiv, Ukraine, soon to be followed by Chiang Mai, Thailand; St. Petersburg, Russia and Canberra, Australia. The airline operates a modern fleet of more than 200 aircraft to a network of key business and leisure destinations across Europe, the Middle East, Africa, Asia Pacific, North America and South America.