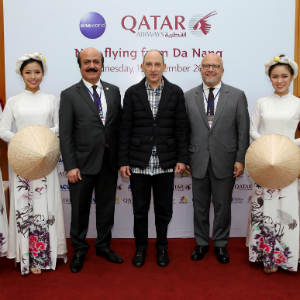 H.E. Mr. Al Baker said: “Qatar Airways is very pleased to extend its reach into Vietnam by launching our third gateway into this beautiful country. The addition of Da Nang to our global network further demonstrates our commitment to the Far East region, a highly important market for Qatar Airways. And we are excited for passengers travelling to and from central Vietnam to experience our award-winning service and product for themselves. With 56 weekly passenger flights to and from Vietnam, we take great pride in in our role in bringing passengers  to and from this beautiful county and also being a trade enabler and connector for Vietnamese and international businesses.”

Commenting on the new route launch, the Vietnamese Ambassador to the State of Qatar, His Excellency Mr. Nguyen Dinh Thao, said: “This year marks the 25th anniversary of diplomatic relations between Vietnam and Qatar, and we are delighted to welcome Qatar Airways to Da Nang, its third Vietnamese destination. The direct flight to Doha will play a crucial role in connecting central Vietnam passengers and freight to the rest of the world. With the increased connectivity, we also look forward to welcoming more tourists to Da Nang, the tourist capital of South Central Vietnam.”

Deputy General Director of Airport Corporation Vietnam and Acting Director for Da Nang International Airport Managing Director, Mr. Le Xuan Tung, said: “Da Nang International Airport is the third busiest airport in Vietnam and is an important transportation hub in the central region. Being only two kilometres from the city centre, the launch of this direct flight will further boost Da Nang’s position as the commercial and educational centre of Central Vietnam. It is a fantastic follow-up to Qatar Airways’ introduction of daily services to Hanoi and Ho Chi Minh City in January of this year, and we appreciate Qatar Airways’ strong support for Vietnam.”

Qatar Airways will operate its Da Nang service four-times weekly with a Boeing B787-8 aircraft, featuring 22 seats in Business Class and 232 seats in Economy Class. Passengers will be able to enjoy the airline’s superior entertainment system, Oryx One, offering up to 4,000 entertainment options.

The world’s second largest cargo carrier has a strong presence in Vietnam with six weekly freighter services to Hanoi, seven weekly freighter services to Ho Chi Minh City and 28 weekly belly-hold flights to Hanoi and Ho Chi Minh City and now Da Nang. Qatar Airways Cargo will offer more than 1400 tonnes out of the country each week, where businesses in the country will benefit not only from direct cargo capacity to Middle East, Europe and Americas but also regular services and reduced transit times. Major exports from Da Nang will consist of garments, perishables and electronics.

Da Nang, one of the largest cities in Vietnam, is known for its sandy beaches and remarkable history as a French colonial port. This charming city offers magnificent views of Da Nang Bay and its beautiful Marble Mountains, making it an ideal destination for a relaxing summer vacation.

Qatar Airways began direct services to Ho Chi Minh City in 2007 and launched its Hanoi service in 2010. In October 2017, Qatar Airways announced its interline partnership with Vietnam-based Vietjet Air, allowing Qatar Airways passengers to travel to and from points in Vietnam not served directly by Qatar Airways using a single reservation across both airlines’ networks.

The launch of Da Nang marks the 14th new direct route to be introduced by Qatar Airways in 2018. As part of its continued expansion plans, Qatar Airways plans a host of exciting new destinations throughout 2019, including Valletta, Malta and Isfahan, Iran, just to name a few.

Qatar Airways, the national carrier of the State of Qatar, is celebrating more than 20 years of Going Places Together with travellers across its more than 160 business and leisure destinations. The world’s fastest-growing airline will add a number of exciting new destinations to its growing network in 2018, including Gothenburg, Sweden; Da Nang, Vietnam; Mombasa, Kenya, flying passengers on board its modern fleet of more than 200 aircraft.