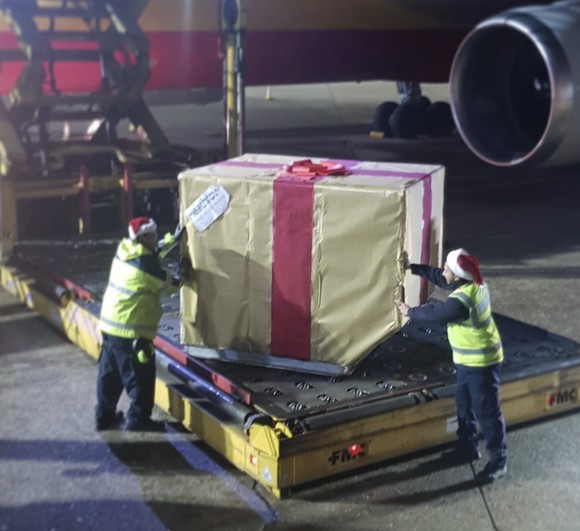 Heathrow expects to fly Over 144,000 tonnes of Christmas cargo for the holiday season

LONDON, UK, 2019-Dec-19 — /Travel PR News/ — Countries around the world simply cannot get enough of a British Christmas and are importing the best bits of our festive traditions in growing numbers. Over 144,000 tonnes – the equivalent of 68 London Eyes – of British festive products are set to be exported through Heathrow this year alone. This is up approximately 3% over last year – demonstrating Heathrow’s vital role, in supporting Christmas festivities across the globe.

Analysis of Seabury cargo data from November and December 2018 reveals a surge in the export of British Christmas essentials and stocking fillers ahead of the holiday period, including:

Whilst capturing a of piece of British Christmas magic helps support exports over the festive period, Britons themselves are set to import nearly 60 tonnes of chocolate to indulge in over the holidays, and 130 tonnes of playing cards to enjoy at festive parties.

For the third year running, Heathrow is celebrating the vast array of UK companies that choose to export via the airport with its “12 Exporters of Christmas” social media campaign #12ExportersofChristmas. The campaign features the success stories of SMEs like salmon exporters Mowi Scotland or bespoke jewellery maker Farah Qureshi Jewellery and how these companies work with Heathrow – especially around Christmas time – to get their products quickly and safely across the world.

“Christmas is always a busy time of year for passengers as they travel to be with family and friends, but it’s also when the unseen magic of the holidays comes to life. Right underneath your feet on your next flight will be examples of the best of British Christmas being sent to the rest of the world. We’re proud to support Britain’s small businesses as they supply Christmas essentials to the rest of the world and invite you to experience the magic yourself of our 12 Exporters of Christmas.”

Heathrow’s latest Trade Tracker, compiled by the Centre for Economics and Business Research (CEBR), reveals the total value of trade through Heathrow up to June this year equalled £118.7 billion, the equivalent of 30% of the total UK trade.* Pharmaceutical products formed a major part of Heathrow’s just in time freight operation, with over 80,000 tonnes travelling through Heathrow last year. The top pharmaceutical products being exported from Heathrow including vaccines, have a value of £1.7 billion in the first half of 2019. Christmas at the airport is not just a busy time for festive British commodities, but also for life saving essentials. For the first time ever, the data reveals Heathrow’s monthly exports surpassed £5 billion in value, highlighting Heathrow’s pivotal role in facilitating trade outside of the EU.

Heathrow’s top 5 destinations exports are flying to, which totalled £32.4 billion in value in the first half of 2019:

Notes to the editors

The estimated weight of the London Eye is 2,100 tonnes

The estimated weight of a New London Routemaster bus is calculated at 12,650 kg

The estimated weight of an average Stonehenge Stone is 22,600 kg

The estimated weight of a Caladonian Sleeper Train (CAF Mark 5 Model) is 43,000 kg

This year we held a competition among cargo operators to capture a new festive cargo photo. Congratulations to DHL for their winning entry included within this release.

Heathrow’s 2019 ‘12 Exporters of Christmas’ is Heathrow’s way of showcasing Britain’s SME exporters who will be hard at work over the holidays sharing the best of Britain’s Christmas traditions with people around the world over the holiday period. Our daily social media campaign running from 9th to 20th December highlighting SME exporting success stories.

This year’s businesses include: