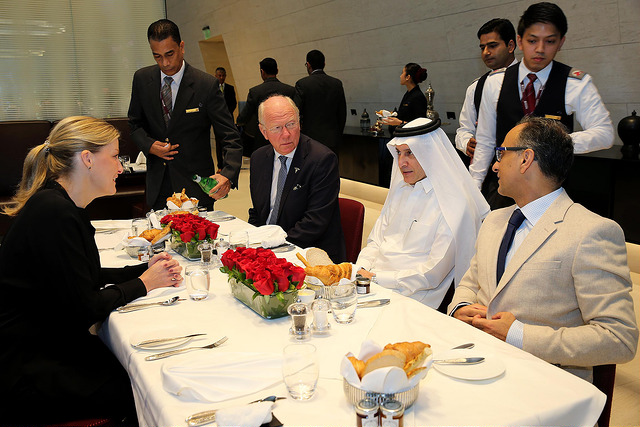 DOHA, Qatar, 2017-Nov-27 — /Travel PR News/ — Qatar Airways has renewed its sponsorship as Official Airline Partner to Orbis UK for a further three years. The airline has been a proud supporter of Orbis and its blindness prevention programmes since 2012.

Orbis is a global charity that brings people together to fight avoidable blindness through access to quality eye care. Together with its partners, Orbis trains eye teams, strengthens eye care services and works on the ground to provide lasting solutions to communities in need.

Orbis’s pioneering Flying Eye Hospital spearheads the charity’s global efforts to transform lives. The world’s only accredited eye hospital with wings is equipped with a state of the art operating theatre which is connected to a class room at the front of the room with a 3D screen, enabling those learning to get a very real view of the surgery taking place. The aircraft also features pre and post-op spaces for patients to recover.

Qatar Airways Group Chief Executive, His Excellency Mr. Akbar Al Baker said: “Qatar Airways strongly believes in giving back to the global community and to making a difference. As an airline that connects communities and people around the world, we are delighted to continue our support for Orbis for another three years as Official Airline Partner. This initiative is of great importance to the global communities served by this state of the art flying medical facility, providing crucial eye care to people around the globe.”

Orbis UK Trustee, Dr Robert Walters said: “We are so thankful for Qatar Airways’ trust, friendship and support since 2012. Together we have already hosted the Flying Eye Hospital in Doha three times and facilitated the royal visits, enabling us to gather the support required to launch Qatar Creating Vision. It is only through the power of partnerships that we are able to proudly celebrate the millions of eye tests provided to children and the thousands of people trained to help find those struggling with low vision in communities.”

The renewed sponsorship this week also coincided with a visit from Her Royal Highness, Sophie The Countess of Wessex, to a ‘Qatar Creating Vision’ programme in Dhaka and Chittagong, Bangladesh. There she watched as patients bandages were removed, spoke with the Orbis volunteers transforming lives and the local medical teams undertaking brilliant work.

The Royal Visit concluded in Doha, where Her Royal Highness Sophie The Countess of Wessex also met with H.E. Mr. Al Baker, to celebrate the achievements of Qatar Creating Vision, which has undertaken 2.4 million eye tests for children and provided over 27,000 training sessions to doctors, teachers and community workers, to reach those living with unnecessary blindness.

In 2013, Her Royal Highness Sophie The Countess of Wessex, in her role as the Ambassador for the International Agency for the Prevention of Blindness (IAPB), visited Doha with the Orbis Flying Eye Hospital to discuss the devastating impact a lack of access to eye care can have on people across the world. In October 2015, the Qatar Fund for Development and Orbis launched Qatar Creating Vision, an initiative that brings together the people of Qatar in the fight against preventable blindness.

Earlier this year, the aircraft returned to Doha to bring together key stakeholders from across the ophthalmic medical community in Qatar to share knowledge of preferred practices and approaches to eye care.

The national carrier of the State of Qatar, Qatar Airways is one of the fastest-growing airlines operating one of the youngest fleets in the world. Now in its 20th year of operations, Qatar Airways has a modern fleet of more than 200 aircraft flying to business and leisure destinations across six continents.