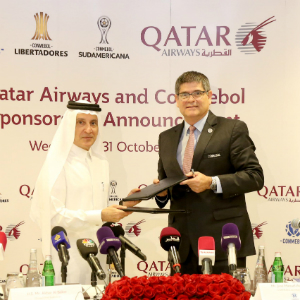 DOHA, Qatar, 2018-Nov-05 — /Travel PR News/ — Qatar Airways is delighted to announce that it is the Official Global Airline Partner of The South American Football Confederation (CONMEBOL), adding another strong sporting partnership to its expanding portfolio. The agreement was signed at a ceremony that took place in Doha on Wednesday at the Oryx Rotana hotel, attended by Qatar Airways Group Chief Executive, His Excellency Mr. Akbar Al Baker, and the Secretary General from CONMEBOL, Mr. José Manuel Astigarraga, and Qatar Football Association Board Member Mr. Ahmed Al Buainain.

The multi-year agreement will provide Qatar Airways with maximum exposure in South America, while strengthening the airline’s global sponsorship portfolio. As part of the agreement, Qatar Airways will be the sponsor of CONMEBOL’s professional football club competitions across South America for the next 4.5 years, with immediate effect through 2022, including the Copa CONMEBOL Libertadores, South America’s most prestigious football competition, as well as the Copa CONMEBOL Sudamericana and the CONMEBOL Recopa. The agreement was negotiated on behalf of CONMEBOL by FC Diez Media, the joint venture between IMG and Perform Group, set up exclusively to service the confederation.

CONMEBOL is the continental governing body of football in South America and is one of FIFA’s six continental confederations. The entity is responsible for the organisation and governance of South American football’s major international tournaments. Described as the “toughest qualifiers in the world”, CONMEBOL national teams have won nine FIFA World Cups, and CONMEBOL clubs have won 22 Intercontinental Cups and four FIFA Club World Cups.

Qatar Airways Group Chief Executive, His Excellency Mr. Akbar Al Baker, said: “Qatar Airways is thrilled to partner with CONMEBOL, which is the oldest continental confederation in the world. We are continually striving to boost our global sporting sponsorship portfolio, and this partnership is just one more example of our dedication to the sports sector. We are also excited to further expand our presence in South America, and look forward to supporting the forthcoming CONMEBOL football competitions.”

CONMEBOL President, Mr. Alejandro Domínguez, said: “We are proud to embark on this journey with Qatar Airways, one of the world’s most prestigious airlines, to drive football development in South America. CONMEBOL’s competitions have a rich heritage and offer some of the world’s most exciting and competitive professional football. And thanks to recent improvements, our tournaments are also among the world’s fastest growing. Naturally, we’re delighted to partner with Qatar Airways, the world’s fastest growing airline, to bring our continents closer together through sport and build a brighter future for all of South American football.”

Qatar Airways, the first-ever airline partner for CONMEBOL’s club competitions, will leverage high brand association and large audience visibility at all 260 matches in both year-long competitions across the South American continent, and will feature beginning with the CONMEBOL Libertadores semi-finals on 31 October. The airline will also be the presenting and sole partner for the Recopa Sudamericana, the home and away fixture between the champions of CONMEBOL Libertadores and CONMEBOL Sudamericana.

Qatar Airways has long celebrated its strong ties with South America; earlier this year the airline announced it was the Official Jersey Sponsor of the world-renowned Argentinian football club the Boca Juniors through the 2022/23 season. In addition, Qatar Airways Group acquired 10 per cent of South American LATAM Airlines Group in December 2016 through a strategic investment, further strengthening ties with the continent.

Earlier this month, the airline announced that it is the Official Global Airline Partner of the NBA’s Brooklyn Nets and the team’s home, Barclays Center, the Brooklyn, New York venue that hosts many of the world’s most exciting entertainment and sporting events.

Qatar Airways proudly flies one of the youngest fleets in the sky, featuring the world’s most technologically-advanced and environmentally friendly aircraft. The airline operates a fleet of more than 200 modern aircraft to a network of more than 150 key business and leisure destinations across Europe, the Middle East, Africa, Asia Pacific, North America and South America, including São Paulo and Buenos Aires.