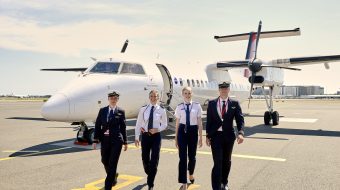 The “Qantas Future Pilot Program” has been designed in collaboration with five universities across Queensland, New South Wales and Victoria, and is open to aviation students at UNSW, Griffith University, University of Southern Queensland, Swinburne University of Technology and RMIT University.

Students will have the opportunity to be mentored by experienced QantasLink pilots throughout their studies, and, if successful through the selection process, will transition to a job at QantasLink straight after graduation.

Based on current university intakes, the program will be open to a potential pool of 300 students each year.

QantasLink Chief Executive Officer, John Gissing, said the Qantas Future Pilot Program is about building the next generation of exceptional pilots from within Australia’s top aviation schools and in return providing students with benefits and placement certainty.

“As the national carrier we have a history of attracting the best and brightest to fly for us. The students chosen for this program will have an enormous head start to their career as a pilot. They will benefit from a direct pathway to Australia’s largest regional airline and access to our experienced pilots throughout their studies,” Mr Gissing said.

“Together with these leading universities, this program will arm high-performing motivated students with the skills needed to transition into an airline and provide them with a platform from which to launch their career as a pilot within the Qantas Group.”

The Qantas Future Pilot Program will see successful students invited to complete an intensive twelve-week Airline Transition Course at the completion of their degree. Once employed, graduates will complete their training under the supervision of QantasLink’s experienced training team and become qualified as First Officers flying the airline’s 74-seat Q400s and 50-seat Q300s. Pilots will later be well-positioned to extend their career with pilot opportunities within the broader Qantas Group of airlines.

The program follows the airline’s recent launch of its Nancy-Bird Walton Initiative, which will see the Qantas Group commit to a 20 per cent intake of women in its 2018 pilot recruitment programs, with the vision for that number to double over the next decade.  By targeting STEM at schools, universities and flying schools the airline will support more girls and women on a path to a career as a pilot within the Qantas Group.

The Qantas Future Pilot Program will launch in January 2018, open to all future and current aviation students at all stages of their degree. Applications are now open and students can visit qantas.com/careers (opens in new window) or their University’s faculty website for more information.

The Qantas Future Pilot Program will complement existing recruitment streams, including as a Direct Entry First Officer, or as a Trainee First Officer.

About QantasLink
As Australia’s largest regional airline, QantasLink currently employs more than 380 pilots and operates a network of 56 metropolitan and regional destinations across Australia.