SYDNEY, 2016-Feb-23 — /Travel PR News/ — London is the location for Qantas’ next flagship global lounge, with construction on a new, dedicated facility at Heathrow Airport to begin in September 2016.

The premium lounge will occupy a split-level space in Terminal 3 that will have capacity for approximately 230 people and offer views over the Heathrow airfield when it opens in early 2017.

Its design will combine the signature features of Qantas’ award-winning facilities in other ports with local touches to make the design and experience distinctively London.

Qantas Group CEO Alan Joyce said the time was right for fresh investment in the national carrier’s presence at the world’s second-busiest international airport, particularly given the continued strong performance of Qantas International.

“The Kangaroo Route is at the heart of Qantas’ identity and London remains one of our most important destinations,” Mr Joyce said. “We want the first dedicated Qantas lounge at Heathrow to be something special.

“Our lounges in Australia and overseas are often named among the world’s best. Customers love them and we make regular improvements based on what they tell us they’d like to see next.

“We’re very proud of the new lounges we’ve launched over the past three years in Singapore, Hong Kong, Los Angeles and Perth – with Brisbane to follow this year – and we’re excited to be bringing this successful formula to our customers in London.”

Passengers eligible to use the lounge will include:

Until the new Qantas lounge opens, eligible passengers will continue to have access to the British Airways and American Airlines lounges at Heathrow. 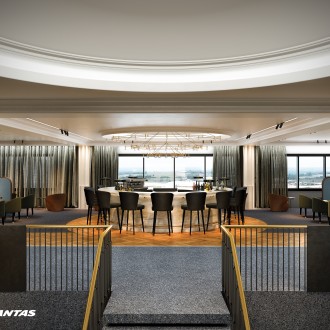