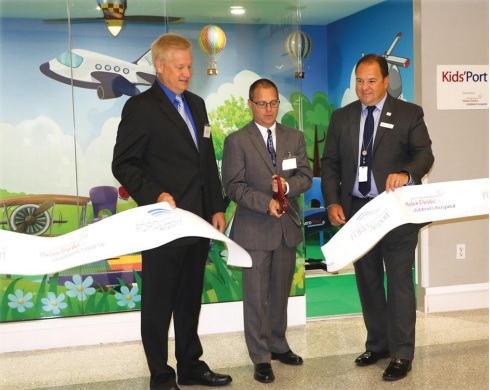 The new space officially opened today (July 26, 2017 ) after a celebratory ribbon cutting, and includes new foam tile flooring, scenic graphics on the wall, a propeller ceiling fan, an illuminated air traffic control tower, toys, and even a replica Spectrum Health AeroMed helicopter where kids can get behind the controls and experience life as a pilot.

“As a father of seven children, I can tell you nothing is more important than having an exciting, vibrant space where kids can unleash some energy while they are traveling,” said GFIA President & CEO Jim Gill. “We are thrilled to see how this space turned out. The team at Spectrum Health Helen DeVos Children’s Hospital did an incredible job of turning our vision into a reality, and we appreciate their support and partnership.”

“Helen DeVos Children’s Hospital is pleased to be able to sponsor the new Kids’ Port play area at Gerald R. Ford International Airport,” said Dr. Matthew Denenberg, Vice President of Medical Affairs at Helen DeVos Children’s Hospital. “The children’s hospital is happy to play a part in welcoming visitors to West Michigan with this fun new addition for families and children to enjoy.”

The Kids Play Areas are one part of the Airport’s $45 million Gateway Transformation Project that also includes new terrazzo flooring, lighting fixtures, new restrooms & nursing rooms, family restrooms, pre and post security business centers, new retail and food & beverage space, and much more. Different portions of the construction will open throughout the summer with phase one set to be complete in late August. Construction on
the Gateway Transformation Project began in December 2015.

About Spectrum Health
Spectrum Health is a not-for-profit health system, based in West Michigan, offering a full continuum of care through the Spectrum Health Hospital Group, which is comprised of 12 hospitals, including Helen DeVos Children’s Hospital; 180 ambulatory and service sites; 3,300 physicians and advanced practice providers, including 1,400 members of the Spectrum Health Medical Group; and Priority Health, a health plan with 794,000 members. Spectrum Health is West Michigan’s largest employer, with 25,400 employees. The organization provided more than $326 million in community benefit during its 2016 fiscal year. Spectrum Health was named one of the nation’s 15 Top Health Systems—and in the top five among the largest health systems—in 2017 by Truven Health Analytics®, part of IBM Watson HealthTM. This is the sixth time the organization has received this recognition.