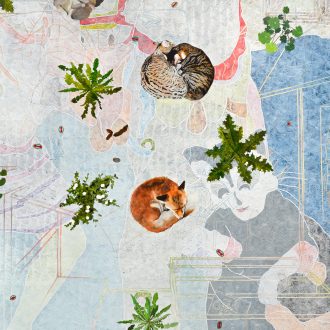 These joint acquisitions by MCA and Tate include three paintings by Helen Johnson (Seat of Power 2016, Bad Debt 2016, and A Feast of Reason and a Flow of Soul 2016), an installation by Richard Bell (Embassy 2013-ongoing) and a video by Peter Kennedy with John Hughes (On Sacred Land 1983-84). In May 2016, the two institutions acquired artworks by Susan Norrie, Vernon Ah Kee, Gordon Bennett and Judy Watson.

Helen Johnson comments: “It is an important moment for me to have these three paintings jointly acquired by the MCA and the Tate. Addressing, as they do, the depredations of British colonial culture in Australia, and some ways in which we perpetuate it, it feels appropriate for these works to be entering the shared custodianship of the MCA in Sydney and the Tate in London.”

Peter Kennedy and John Hughes add: “Specific to Australia, On Sacred Land – its subject matter and content – now has the potential to take its place in an international mainstream. Its inclusion in both Tate and MCA Collections adds significantly to its cultural value.”

Richard Bell concludes: “I’m very proud to be part of this project. I recognise the stature of the Tate and the MCA and the consequences of their acceptance of my work.”