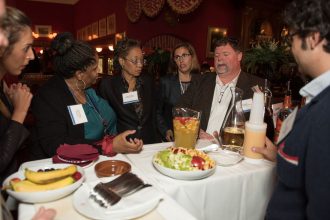 With the aim  to promote Madrid as a venue for congresses and meetings in the US market, Madrid Convention Bureau has successfully made a roadshow in Washington DC and New York.

MADRID, SPAIN, 2017-Nov-02 — /Travel PR News/ — The City Council is stepping up its efforts to promote the destination of Madrid as venue for professional meetings at the international level. The last week the Madrid Convention Bureau (MCB) was set to hold roadshows in the cities of Washington and New York. The presentations wind up the promotional campaign conducted by Madrid in the United States, which also saw the capital take part in the recent IMEX America international exhibition.

The aim was to promote Madrid as a MICE (Meetings, Incentives, Conventions and Exhibitions) destination in one of its priority markets with the greatest potential for growth. The United States accounts for roughly 10% of all foreign professional visitors received by Madrid each year, according to the 2016 MICE Tourism Report compiled by Ideara Investigación S.L., in collaboration with MCB. Transport connections between the two destinations contribute to this. Madrid boasts 11 routes with direct flights to the United States, in addition to a new route to San Francisco operated by Iberia.

These presentations in Washington (24th October) and New York (26th October) enabled Madrid to familiarise 60 specialised agencies with all that the city has to offer the MICE segment. Using a fun format launched two years ago, which includes themed stations and competitions (based on concepts such as gastronomy or value for money), attendees discover essential information, interesting facts and useful details about the capital.

These sorts of more innovative meetings achieve a high degree of satisfaction among industry professionals, as they foster an ongoing interpersonal relationship in a more entertaining context, which facilitates long-term information recall. The respective venues chosen to host the roadshows were two places linked to Spanish culture and gastronomy: Taberna del Alabardero in Washington and the Riu Plaza Times Square Hotel in New York.

Initiatives like these promote the establishment of new contacts in the sector, for MCB as well as for the 12 companies associated with it which took part in both presentations: the Wellington, Puerta América, NH Collection Madrid Eurobuilding, Melia Castilla and Marriott Auditorium hotels as well as various DMCs, including Exclusive Spain Tours, In Out Travel and Premium Incoming, in addition to other suppliers such as Conference Studio, Madrid’s Municipal Conference Centre, Conventia and Spain In Style DMC.

This month, via Madrid Convention Bureau (MCB), the city of Madrid also attended one of the main MICE tourism events, the IMEX America exhibition. During the event, which took place from 10th to 12th October in Las Vegas, fifty business meetings were held with industry professionals and all visitors to the stand were provided with information. On this occasion, MCB was accompanied at the event by eight associated companies: the city’s Municipal Conference Centre, Santiago Bernabéu Stadium, the hotels NH Collection Eurobuilding, Novotel Madrid Center, Vincci Soho and Puerta de América, and the DMCs Cititravel and MTZ.

To support all of these activities aimed at promoting the destination of Madrid in the United States, the city has stepped up its publicity campaign in industry-leading specialised media.

With a view to positioning Madrid as a destination for all sorts of corporate events or incentive trips, Madrid Convention Bureau conducts nearly thirty international promotional activities every year, including fairs, professional shows and presentations, in addition to organising ten fam trips for agencies and customers from the city’s strategic markets. In 2016 nearly 18,000 meetings were held, of which almost 87% were conferences, conventions and company events. These meetings amounted to an economic impact of 710 million euros for the capital./