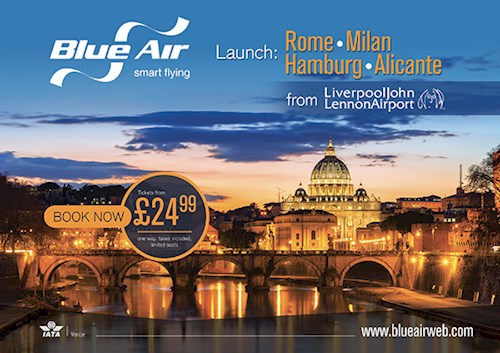 LIVERPOOL, England, 2016-Nov-04 — /Travel PR News/ — Blue Air have today announced the latest development in their strategy to expand operations across Europe with the news that Liverpool John Lennon Airport (LJLA) is to become their newest European base.

This will be Blue Air’s eighth European base and they will be locating a 189 seat Boeing 737-800 aircraft at Liverpool John Lennon Airport at the beginning of the Summer 2017 season with the introduction of four new services – a daily departure to Rome Fiumicino, four times weekly to Milan Bergamo, four times weekly to Hamburg and a three times weekly service to Alicante.

These new services will complement Blue Air’s existing flights from Liverpool to three destinations in Romania and are expected to be popular with both departing passengers from across the region and arriving international visitors too. An additional 160,000 seats will be on sale for these new flights to and from Liverpool next Summer.

Importantly, the basing of a Blue Air aircraft at Liverpool will also create up to 35 new, direct, local jobs too, with the task of recruiting and training employees for positions as pilots, cabin crew, engineers etc, commencing immediately. Blue Air are also considering a special Liverpool focus for the livery of the aircraft to be based at LJLA, as they look to become Liverpool’s airline and will discuss this with the Airport in the coming weeks in time for the start of their new services next year.

Blue Air first started operations from Liverpool in December 2014, with a three times weekly departure to Bucharest. Just 3 months later the airline added a twice weekly service to Bacau in March 2015 followed by a twice weekly service to Cluj-Napoca in June 2016. Blue Air has now carried almost 120,000 passengers on flights to and from Liverpool in less than two years of operations.

Blue Air have seen significant growth in their business so far this year and are forecasting a 50% increase in passenger traffic across their network by the end of 2016 compared to 2015, reaching a new record high of 3.2 million travelers.

Announcing the airline’s latest development at Liverpool, Blue Air’s CEO, Gheorghe Racaru commented, “Today is a historic moment for both Blue Air and the Liverpool City Region as we announce our eighth base at the airport, adding four routes. In fact, we are going to put three brand new destinations on Liverpool’s route map, by flying directly to the currently unserved cities of Rome, Milan and Hamburg, which are likely to be popular with customers travelling for both business and leisure. Additionally, we will offer the region’s passengers an increased choice with our Alicante service.

The UK is a strategic market for Blue Air and we strongly believe that basing a 737-800 at Liverpool will allow us to strengthen our position as one of Europe’s fastest growing airlines. By making travel easy, convenient and affordable for local passengers, we will firmly establish the Blue Air brand in the region. We will also create a number of local jobs too as we look to employ several cabin crew staff, pilots and engineers from the Airport’s local catchment area.

Our commercial performance continues to be robust across our network comprising more than 80 routes now, with particular strength on city routes used by business and short break leisure travelers. These results demonstrate the success of our strategy and we will continue to further develop this trend in Liverpool. Blue Air is now part of Liverpool and the City Region and on this special occasion, I invite all Liverpudlians to experience our top-quality service. Lastly, thanks to the close cooperation with Liverpool Airport and Visit Liverpool, we look forward to investing significantly and helping to sustain the local economy, and subsequently increasing our presence at the airport with even more air links in the coming months.”

Andrew Cornish CEO of Liverpool John Lennon Airport commented, “Since day one of Blue Air’s operations from Liverpool they have gone from strength to strength and this latest development is the natural next phase of their continued expansion.

Blue Air are creating something special here. They very much want to be a part of the region’s renaissance by investing in an area where they see tremendous opportunities to successfully grow their business, at the same time as creating local employment and attracting inward investment.”

Find out more and make a booking:

Reservations for the new direct Blue Air services from Liverpool are now available via www.blueairweb.com, through the airline’s call centre at prices starting from £16.99 to Hamburg, £24.99 to Milan Bergamo and Rome Fiumicino and £29.99 to Alicante (one-way price including all taxes and non-optional charges, limited availability).

Blue Air has received the certificate of IATA Operational Safety Audit (IOSA) from the International Air Transportation Association (IATA) for its outstanding operational standards and it is now a full IATA member.

Blue Air operates a fleet of Boeing 737 aircraft, with retrofitted interior that includes state of the art Recaro seats allowing passengers a better and more comfortable experience during their flight.