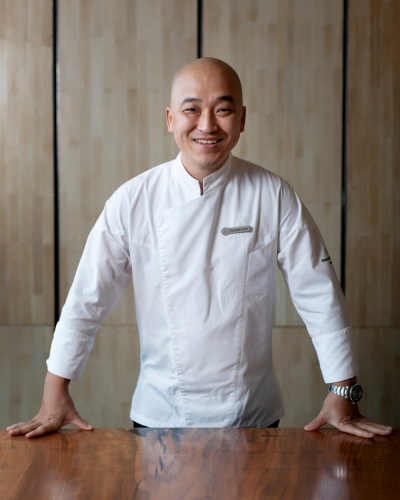 Born in Seoul, Korea, Chef Keneth always had a deep appreciation of Japanese food and as soon as he completed his military service, he pursued his dream of a career in Japanese culinary art. Tokyo was his first destination and although he could not read or speak Japanese, he studied the language by day and worked in a restaurant in the evenings. His hard work and determination gained respect from his colleagues and he was applauded by the head chef, who in turn offered him an opportunity to learn traditional Kaiseki cuisine. Following many years of rigorous training in Kaiseki cuisine, Chef Keneth is adamant that unrelenting attention to detail is fundamental when preparing Japanese cuisine.

Chef Keneth moved from Japan in 1997 to Chef Nobu Matsuhisa’s original London restaurant. Nobu, famous for globalising Japanese cuisine, was an exciting opportunity and his experience in London afforded him a completely new perspective on Japanese cuisine. The magic of incorporating local flavours and ingredients was a key learning milestone in Chef Keneth’s career in London, which today still impacts his overall style.

Chef Keneth continued his globetrotting adventures working in luxury hotels in the Middle East followed by the British West Indies, before arriving in China in late 2020.  He is excited to launch his new menu at Kumoi, featuring a strong Kaiseki influence combined with elements and techniques from diverse cultures.

Some highlights of the new menu include:

Pumpkin chawanmushi, a classic appetiser with a modern twist. The mini pumpkin assumes the role of a tea cup. Its ample golden shade is just right for autumn, a season of harvest. The pumpkin’s natural sweet taste compliments the savoury egg custard elevated by a lobster consommé. Chef Keneth dresses up this dish with a touch of spicy seafood paste, which gives this gentle entrée a distinctive Cantonese character.

King bull wagyu beef hoba-yaki, another signature dish, inspired by the rustic and natural cooking methods practiced in the mountains of Central Japan. The locals use a dried hoba, the dried leaf of honoki – a magnolia leaf – as a vessel for cooking meat in white miso. Chef Keneth adopts a hoba presentation to create the ambience of a serene autumn mountain landscape combined with ancient forests, illuminated by sunlight with a gentle mist rising from the ground. A medium marbled beef of domestic wagyu, famous for its high quality, is selected for the grill and accompanied by a fruity yuzu (pomelo) miso dip to neutralise its rich flavour.

Salmon carpaccio, black truffle and ponzu sauce; and truffle foie gras roll, barbecued eel, chives, sweet soy and truffle salsa are two dishes with Chef Keneth’s unmistakable fusion style. The ponzu dressing served with the salmon carpaccio is made with Japanese citrus vinegar and bears a strong resemblance to ceviche, a household favourite in South America. The tantalising combination of the salmon carpaccio and the ponzu dressing, accented with the truffles, is memorable. For the truffle foie gras roll Chef Keneth deep-fries the sushi roll with a tempura batter, to offer an extra layer of texture. The sweet soy and truffle salsa create a dynamic flavour combination.