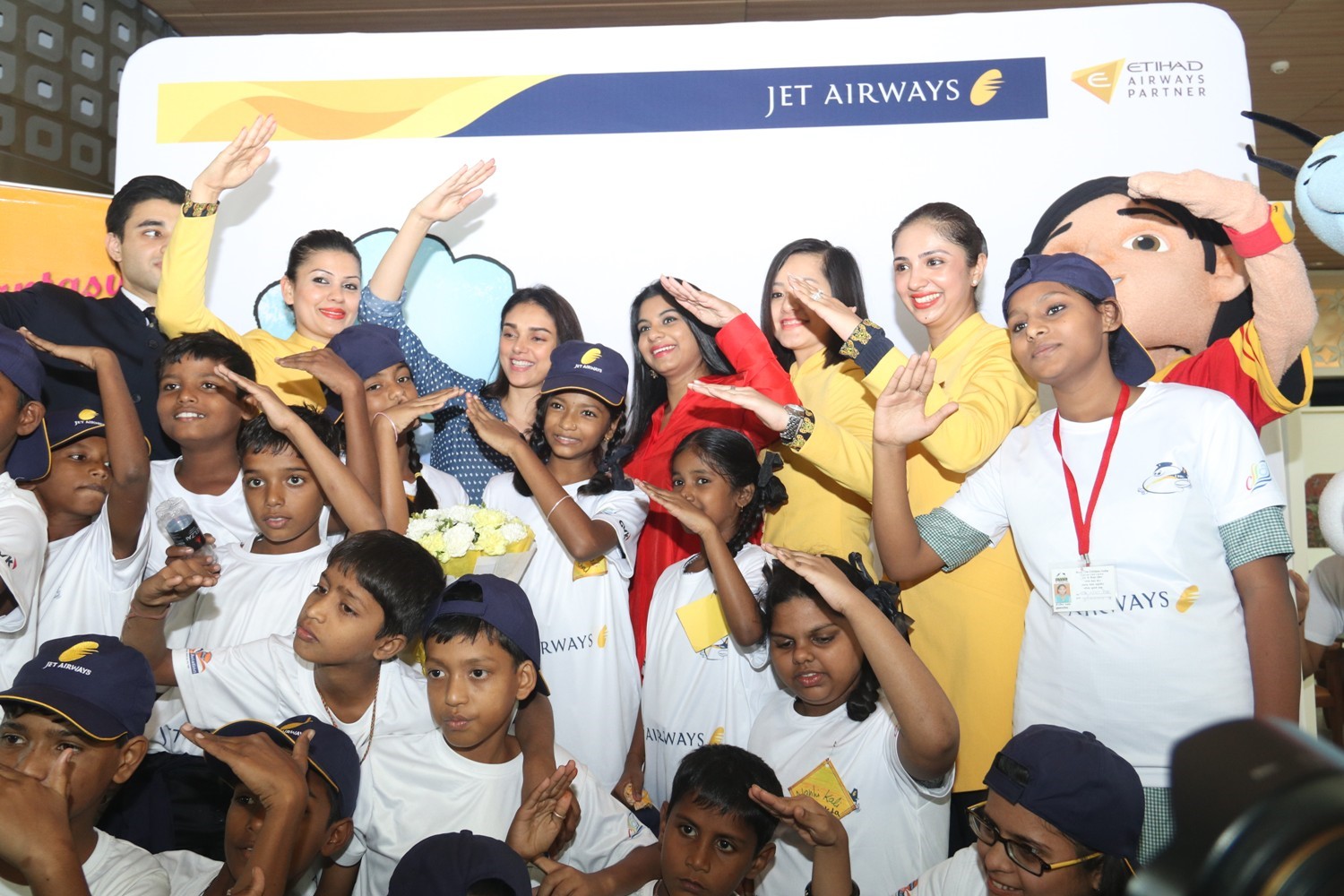 Joy ride for more than 100 children from three NGOs; Save The Children India, Nanhi Kali and Shelter Don Bosco
MUMBAI, 2016-Nov-14 — /Travel PR News/ — Jet Airways, India’s premier international airline, celebrated Children’s Day by giving wings to the flying dreams of over 100 children from NGO’s, that work with marginalised sections of the society, via its ‘Flight of Fantasy’ initiative.

Flight of Fantasy, Jet Airways’ annual engagement, now in its 19th year, is an integral part of the airline’s social outreach initiative. The programme aims to fulfill the dream of flying of less privileged children for the very first time by inviting them on-board and treating them to a once in a lifetime flying experience. Through this unique program, Jet Airways endeavours to open up the world of aviation and the opportunities therein, to children who are vulnerable and most at risk in our society.

Over the years, Flight of Fantasy has gained extensive admiration and strong support across the industry from partners who have eagerly joined hands to contribute to this noble cause.

This year, Jet Airways partnered with leading corporates including GVK, Mumbai International Airport Limited (MIAL), Indian Oil Corporation (IOC), Oberoi Flight Services and Nickelodeon from Viacom 18, to extend young minds from Non-Governmental Organisations (NGO’s) – Save The Children India, Nanhi Kali and Shelter Don Bosco – dedicated to the upliftment and education of underprivileged and differently-abled children – an opportunity to explore the skies and the world of aviation.

The fanfare and excitement for Jet Airways’ annual Flight of Fantasy commenced prior to the children taking to the skies with a lively programme of music, dance and games at a special party zone had been created to entertain the children at the Domestic Departure Terminal (T2) of Chhatrapati Shivaji International Airport, Mumbai. The zone was adorned with balloons and streamers in the airline’s lively colours to add an element of fun and excitement to the occasion. Adding to the engagement were Nickelodeon’s toons Shiva and Oggy who mingled and entertained the children at the airport. The kids were overwhelmed seeing the toons as it was their first ever experience of meeting Shiva and Oggy live.

Famed Bollywood actresses Athiya Shetty and Aditi Rao Hydari made a surprise visit to the event which became an excellent gift for the children. Both Athiya and Aditi interacted with the children closely, answering queries on films, distributed gifts and personally greeted each and every child along with patiently signing autographs and taking selfies, creating a memory that will be etched in the minds of the children forever.

Subsequently the children, invited guests including media persons, checked-in for flight 9W 9828, which took off from the Mumbai’s Chhatrapati Shivaji International Airport (CSIA) at 1545 hrs and returned after an engaging fun-filled hour in the skies where they were flown along the picturesque western coast of India. During the flight, the party continued mid-air with Jet Airways’ cabin crew participating in the celebrations ensuring a comfortable and safe flight for the children.

Jayaraj Shanmugam, Chief Commercial Officer, Jet Airways, said, “Jet Airways’ has always focused on supporting causes related to the development of children and their education, especially the less fortunate ones, as part of its commitment to society. Creating long lasting memories and beaming faces of joy is our true reward. The airline is extremely happy to have been able to provide cheer to these children and takes immense pride in our support to the NGOs such as Save The Children India, Nanhi Kali and Shelter Don Bosco. We also thank our partners GVK, Indian Oil Corporation, Mumbai International Airport Limited, Oberoi Flight Services and Viacom 18 for their invaluable support in turning young dreams into reality via this special flight.”

Speaking on the occasion, Rajeev Jain, Chief Executive Officer, GVK Mumbai International Airport Pvt. Ltd. (MIAPL) said “We are delighted to be a part of this initiative and take pride in supporting this noble cause. Mumbai International Airport Pvt. Ltd. strongly believes in fulfilling its responsibility towards societal development and has willingly extended its full support to initiatives in line with the company’s philosophy. It is overwhelming to see organizations joining hands to provide a platform to underprivileged children to explore the world of aviation.”

Nina Elavia Jaipuria, Business head, Kids cluster, Viacom18 said, “Nickelodeon believes in empowering kids by ‘celebrating their bachpana‘ – allowing them to express themselves and experience new things. The Flight of Fantasy is a great initiative that allows children to live their dream. We are excited to partner with Jet Airways in this engaging initiative that helps children to celebrate their bachpana and enjoy a ‘money can’t buy’ experience.”

The day was made memorable by association from the partners who came together to create a memorable day for the young children. The provision for access to the venue, lounge and decoration was courtesy GVK, while Oberoi Flight Services provided the refreshments. Indian Oil Corporation provided fuel for the flight and Mumbai International Airport Limited waived off its landing and navigation charges. On their return, the airline’s junior guests were presented with specially designed hampers by Viacom 18 ensuring that the children took along joyful memories that will be cherished in the years ahead.