TOKYO, 2014-03-20 — /Travel PR News/ — Japan Airlines (JAL) and JetBlue Airways have agreed to further expand their codeshare cooperation starting March 30, 2014, resulting in an increase in the number of JAL codeshare flights available on U.S. domestic routes operated by JetBlue. Sales and reservations for the newest codeshare flights will be available from March 25, 2014.

JAL also recently announced the launch of double daily service on its Tokyo (Narita) = New York (JFK) route from March 30, 2014, with the new second daily operation from Narita scheduled to arrive at JFK in the early evening. To further improve the convenience for transit passengers at New York, the latest codeshare flights on JetBlue deliver same-day connections to multiple U.S. cities.

JAL initially launched its codeshare cooperation with JetBlue in April 2012 to strengthen JAL’s network throughout the U.S. East Coast. JetBlue, whose main hubs are at Boston (Logan) and New York (JFK), boasts a strong U.S. domestic network and is known for its service quality including leather seating, rich in-flight entertainment, and unlimited snacks and drinks.

The expanded codeshare cooperation with JetBlue is in addition to JAL’s extensive codeshare cooperation under joint business with oneworld® alliance partner, American Airlines. Together with American and JetBlue, JAL is continually striving to provide its customers with greater convenience through expanded network within the U.S. 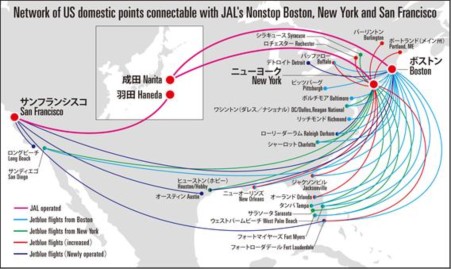 *All of above flights are operated by JetBlue.