Cairo at Nile Plaza, Egypt, 2014-6-6 — /Travel PR News/ — As one of the first authentic Italian restaurants to make Cairenes cry “Mama mia!” Bella at Four Seasons Hotel Cairo at Nile Plaza is getting revamped. Not only will the restaurant itself look and feel different upon its impending re-launch but the menu too will get a whole new taste as new head chef and Italian food guru Emanuele Cappellini brings his worldly experience to the five star hotel.

Having started his career at the tender age of 17, Cappellini is one of the most experienced chefs in Cairo right now.  Being Italian, the world famous cuisine is his forte. “Cooking the dishes I grew up with and adapting, modernizing and playing with them is my favourite thing,” he says.  In the six years after his official training, he found himself in kitchens across the world from his homeland of Italy to Switzerland and the USA before taking up a three year residency at the only Michelin Star Italian restaurant outside of Italy at Four Seasons Hotel des Bergues Geneva, thus proving his prowess and knowledge in the culinary world, which he hopes to impart on Egyptian foodies at Bella.

Cappellini has worked at some of the world’s top hotels, which naturally means some of the world’s best restaurants from Delhi to London, Puerto Rico, New York and Geneva. Now, he’s in Cairo catering to the most discerning taste buds at Four Seasons at Nile Plaza. Bringing his heritage with him, he plans to introduce Egypt to the true taste of Italy – though that isn’t without its challenges. “When working in a foreign country, it’s really important that the ingredients used are carefully tested and tasted so the end dish is as the original, while using quality imported ingredients,” he explains. Matched with one of the most impressive imported wine lists in Egypt, which Four Seasons at Nile Plaza prides itself on, Bella is shaping up to be THE go-to Italian restaurant in Cairo.

You may also be interested in:  Four Seasons Hotel Cairo at Nile Plaza welcomed 6,000 guests to an exclusive dinner at the New Suez Canal Opening Ceremony on August 6

“I want to create a real Italian dining experience,” adds Cappellini, referring to the renovations currently underway at Bella. “By opening up the kitchen, letting the unmistakable aromas of fresh Italian cooking permeate the place, we’re promised an authentic atmosphere.”

As for the flavours? “I love working with seafood and fresh herbs. Look out for my signature lobster dishes,” says the charming chef with a wink. 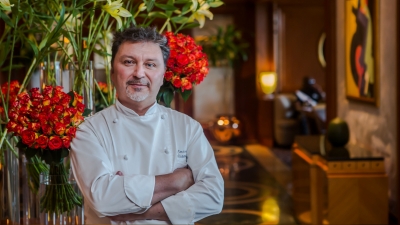