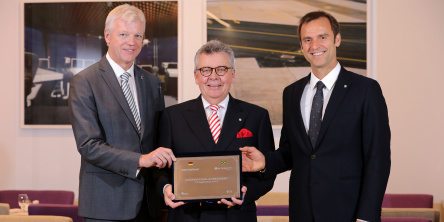 Brazil-based Intercity Hotels and German IntercityHotels to work together on marketing, promotional, sales and trade fair activities with effect from 2018

CITY, Country, 2017-Sep-19 — /Travel PR News/ — This month sees IntercityHotel celebrate its 30th anniversary. The founding principle of operating hotels located in the immediate vicinity of major transport hubs has helped the chain to achieve considerable awareness and popularity, particularly in the German-speaking countries. IntercityHotel GmbH was set up by Deutsche Bahn in 1987 on the basis of a concept that had been jointly drawn up with Steigenberger Hotels AG. The latter has been the sole owner of IntercityHotel GmbH since 2004.

Over the past three decades, the brand has rapidly established itself and underdone a continuous process of further development. Its idea of offering accommodation and conferencing services near major railway stations and later also at airports in Germany was extremely well received from the very outset. The economic success and high degree of acceptance enjoyed by IntercityHotel GmbH subsequently led to growth abroad. In 2000, the Austrian capital Vienna became the first location to be launched outside Germany, followed by Enschede (Netherlands). Since last year, there have also been IntercityHotels outside Europe in Salalah (Oman) and in Qingdao (China), in 2018 Dubai (United Arab Emirates) will follow.

The brand’s look and feel has been modernized on a regular basis over the course of the years. Its latest design generation was created by Italian architect Matteo Thun and is meeting with a great response at newly opened hotels in Brunswick and Duisburg. A special IntercityHotel app also offers state-of-the-art service by enabling guests to use their smart phone for check in, check out, payment and to open the door to their room. One trademark feature introduced from the beginning was a “FreeCityTicket” scheme allowing local public transport to be used free of charge at the respective location.

Joachim Marusczyk, Managing Director of IntercityHotel GmbH, has been on board from the start and is delighted at the positive developments he has witnessed. “IntercityHotel has been a true success story for 30 years. The portfolio currently comprises 42 hotels and more than 7,000 rooms, and the only way is up. No one at the time thought that this would have been possible.”

To mark its 30th anniversary, IntercityHotel GmbH has instigated a special new link by entering into a partnership agreement with the Brazilian brand Intercity Hotels, which operates 34 properties in Brazil and Uruguay. The two hotel brands have no formal business ties, coincidently the Brazilian Intercity Hotels´ founder and Managing Director Alexandre Gehlen, who has a German family background, took the inspiration to build his company in Brazil from the German railway system and its Intercity train. Mr. Gehlen wanted a fast growing and fast service company for businessmen to stay in Brazil. Apart from the name, the two companies have a lot of synergy concerning managing tools as well as product standards.

The partnership, which will be implemented from January 2018, will focus on the mutual presentation and linking of hotels from both groups on the company’s respective websites. In future, guests will be able to use the two Internet presences to obtain information about hotels in Europe or South America and to access the relevant booking screen, offered in their own language. Coordinated marketing activities and an exchange of operational know-how are also planned, and the Sales Teams of both brands will support each other with events such as joint trade fair appearances. Alexandre Gehlen commented: “We are very happy to announce this cooperation, it will make our companies more solid in the international markets but fundamentally provide our guest portfolios a broader net of upper mid-range hotels in South America, Europe and Asia.”

The official opening ceremony at the IntercityHotel Duisburg provided the vehicle for the start of the 30th birthday celebrations of IntercityHotel GmbH. At this event, the hotel company formally announced a donation of €30,000 to the Christoph Metzelder Foundation, which has committed to using the money to support integration and social projects in the city of Duisburg. The “Wings of Help” charity, which provides essential supplies to victims of natural and humanitarian catastrophes, also received a gift of 10,000 towels with the old IntercityHotel logo to assist them with their valuable work.

IntercityHotel is a Deutsche Hospitality brand. It stands for modern superior mid-range hotels centrally located within easy walking distance of railway stations or airports. Guests benefit from a “FreeCityTicket”, which enables them to use local public transport free of charge. The portfolio includes over 40 hotels in Germany, Austria, the Netherlands and China. Deutsche Hospitality operates two further brands: Steigenberger Hotels and Resorts stands for 60 luxury hotels – from historic and traditional establishments to vibrant city hotels and wellness oases surrounded by nature. Jaz in the City branded hotels reflect metropolitan lifestyle and draw upon the local music and cultural scene – the first Jaz Hotel opened in Amsterdam in 2015.

Intercity Hotels Brazil is an ICH hotel brand, which stands for mid-market urban hotels. The portfolio includes 34 hotels in 24 cities in Brazil and Uruguay. The 18-years company has a fast growing track history in Brazil due to its innovative managing tools and product standards focusing on the real need of business and city travellers. The ICH operates two other brands. One is a partnership with British based design hotel company Yoo Hotels and Resorts. ICH holds right to develop and manage the Yoo2 hotels in South America. The first Yoo2 hotel opened in Rio de Janeiro in 2016. The hi! brand has a cheap and chic concept and the first is set to open in south of Brazil in 2018. http://www.intercityhoteis.com.br/en/