Article follows the photos. Click on a thumbnail to view and download a high-resolution version of the image. Due to the large file size of the high-res images, they may take a few minutes to appear. You must be logged in to view the high-res images.

ore than two million holiday lights illuminate Garvan Woodland Gardens in Hot Springs this time of year for Holiday Lights. The event transforms the Gardens into a whimsical winter landscape through December 31.

The mechanics of installing the sizable number of tiny bulbs for the seasonal event, which will bring in around 65,000 visitors, entails incredible behind-the-scenes logistics.

According to Bob Byers, Associate Executive Director of Garvan Woodland Gardens, the staff works around 13,600 hours to put on the show. That’d be enough to do for six and a half employees working full time year-round! In addition, 4,690 volunteer hours were donated to building and installing the displays. Overall, 32 volunteers and 15 staff were involved in the process of installing the lights.

Garden staffers say seeing the reactions to the displays makes all that hard work worthwhile. “The other exciting thing for us is how the show is becoming a multi-generational tradition for many families in the region,” said Byers.

Popular displays people seek out at the show include James the Train, a full scaled model of a small steam engine; the Schueck Rose Tree, a new 50 foot animated tree; wrapped trees such as a 35-foot deodar cedar; a 13-foot lighted koi fish at the pond; and snowfall lights.

Making Holiday Lights happen costs $170,000 in materials and labor. Coordinating all the supplies, people, and schedules necessary to put on the event in a tight time frame is an impressive undertaking. They begin installation on the project September 1st and it takes around 2 1/2 months to complete.

Their first show was in 2001. “The weather was horrible that year and we were making things up as we went,” said Byers. “But the show itself turned out pretty well. We were forced due to low budget and a short timeframe to do everything in house and that turned out so well we’ve continued to do the show ourselves. One of the great things about that is almost everything in the show is unique and one of our hallmarks is 3-D displays instead of the typical wire-frame set pieces that compose most of every other show we’ve seen.”

Byers creates the preliminary concepts for most of the show. There are also two employees who specialize in holiday light show construction: James Scallion, who coordinates design and crew, and Chester Morphew, who works on design, animation, and in-field direction of crew. “They work on the show year round,” said Byers. “Both of them plus a retired welder do almost 100% of the fabrication of new elements.”

This year’s new addition, the Schueck Rose Tree, is a 50-foot animated tree that contains over five miles of steel. It’s lit with more than 100,000 LED lights, and runs custom animations programmed on site. Byers came up with the idea and Scallion designed it. The main welder, Roger Witcraft, an 80-year old retired welding instructor, was instrumental in the construction process, which began in February of this year and was finished in late October.

Byers got the idea for Holiday Lights in the mid-90s and practiced with displays at his home for a number of years. “I was inspired by seeing the popularity of light shows at public municipal displays and also at Callaway Gardens [in Pine Mountain, Georgia], one of the first public gardens to start doing lights to increase winter visitation,” he said.

The show began with mini-light sets and power cords purchased from Wal-Mart and Hobby Lobby. Holiday Lights has now been converted to LED lighting, reducing costs by 75% over the six week display period.

“With the change to light emitting diode technology (LED) our energy consumption has dropped enough that a $14,000 electric bill for the show in 2008 was under $4,000 last year, and will drop again this year as we substantially complete the transition to LED,” he said. “Another substantial savings is the fact this has greatly reduced the number of power cords needed, which used to take a large portion of our budget.”

The plan is to keep growing the show and for it to continue to be a winter tradition for visitors. “We’d love to create a winter attraction that draws tours from all over the country like the shows at Callaway and at Longwood Gardens,” said Byers.

Garvan Woodland Gardens set a paid admissions record in fiscal year 2012, with 138,478 admissions. According to a report featured in Arkansas Business, the Gardens bring a $5.8 million economic impact to Arkansas.

Garvan Woodland Gardens is located on the shores of Lake Hamilton and are part of the department of the University of Arkansas’ Fay Jones School of Architecture. It is the only botanical garden in the nation that occupies all of a peninsula in a major water body. Popular garden attractions include The Anthony Chapel, a work of art that features a 57-foot, open-rafter ceiling supported by pine columns and crossbeams and the Joy Manning Scott Full Moon Bridge. New additions to the Gardens include the lighting of the new Floating Cloud Bridge area, the displays on the new flagstone plaza around the Garvan Pavilion, a new dedicated golf cart path in the Garden of the Pine Wind, and a new lighted path to the Anthony Chapel. For more information, call 501-262-9300 or visit www.garvangardens.org. 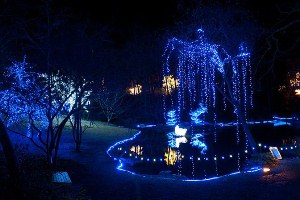