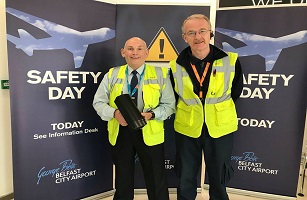 The week-long initiative, held in May, is organised annually by the Airport Operators Association (AOA) at airports across the UK.

The accolade was presented during a ceremony at the AOA Annual Conference held at the Royal Lancaster Hotel in London.

“We are delighted our efforts to engage the local community during 2017 UK Airport Safety Week have been recognised by this prestigious award.

“A packed programme of events took place across the week, with participation from internal and external partners, charities, children, passengers, local councils and businesses.”

Among initiatives held during the week, Belfast City Airport invited local schools and children of staff to enter a competition to design a poster which raised awareness of airport-related safety issues among younger people.

A special session was also held with PEAT (Parents Education as Autism Therapists), providing a walkthrough of the airport journey to reduce uncertainty and stress associated with air travel for those on the autism spectrum.

Meanwhile, the airport’s fireservice carried out four separate sessions on CPR and defibrillator use throughout the public areas of the terminal building in addition to staff restrooms, involving employees and passengers of all ages.

Mark added: “The aim of the week was to lead the way on airport safety by encouraging participation and engagement among a wide spectrum of stakeholders.

“This was achieved by reaching out to groups and organisations not directly linked to aviation to raise awareness of issues such as aerodrome safeguarding and mental health.

“Although this award focuses on one week, the promotion of health and safety, among both staff and passengers is the number one priority for Belfast City Airport each day of the year.

“We are committed to making the travel experience one that is enjoyable, stress free and safe for all those that pass through the airport on a daily basis