LONDON, 2014-03-11 — /Travel PR News/ — All households most affected by noise from a second runway at Gatwick would receive annual compensation equivalent to Band A Council Tax (currently £1000) if and when the runway becomes operational, Gatwick Airport announced today.

This represents the next stage of Gatwick’s industry leading approach to noise management at the airport (Minimise, Mitigate, Compensate). It underlines the importance that the airport attaches to addressing environmental issues and acting as a responsible neighbour.

Commenting on the proposal Stewart Wingate, CEO of Gatwick Airport, said: “Expansion at Gatwick would, without doubt, deliver many upsides for our local community in terms of jobs and investment. But we must also recognise the negative noise impacts on local people from more flights. Gatwick’s location obviously means that comparatively fewer people would be affected by a new runway. However, I believe we must do more to help those that would be affected.

“How we best compensate communities affected by major infrastructure projects is an issue facing a growing number of sectors – from aviation to energy. Our proposal would see the people most affected by expansion at Gatwick receiving monetary compensation.

“Under the scheme, we are pledging £1,000 towards Council Tax for qualifying households in the local area, if and when a second runway became operational. Our current estimate is that as many as 4,100 households (i) could qualify for this scheme and so this would provide a real and positive benefit to a significant number of people.

“Environmental issues are at the centre of the debate about runway capacity in the South East and noise reduction, mitigation and compensation are therefore at the heart of our expansion plans. This scheme will be a cornerstone of our planned package of measures for local residents.”

Gatwick’s location to the south of London means the potential impact on people is at a much lower level than at Heathrow. According to the Civil Aviation Authority, 3,650 people living in 1,600 homes around Gatwick are affected by aircraft noise today (ii). At Heathrow, on the same basis, almost 240,000 people living in 100,000 homes (iii) are impacted by aircraft noise – more than the total number of people impacted by all other major Western European airports combined.

You may also be interested in:  London Gatwick welcomes Norwegian's non-stop service to Buenos Aires

Gatwick has long recognised that people who live near airports have concerns about noise and takes its obligations to the environment seriously. The airport is at the forefront of industry noise management initiatives, and its ongoing noise reduction scheme has already set new standards in protecting local communities against noise pollution. For example:

• Last year Gatwick became the first – and so far the only – UK airport to trial, and get permission to implement, Precision Navigation which allows aircraft to fly on much narrower flight paths rather than in wide swaths enabling aircraft to fly over areas with the least amount of people living under its flight path.

• Gatwick has also recently become the first UK airport to fully consult on modernising its airspace, which it believes could potentially reduce noise annoyance for over 65% of households currently affected, and

• Earlier this year Gatwick announced plans to roll-out one of the largest and most innovative noise mitigation schemes of any airport in the UK and across the rest of Europe, offering hundreds more local homes up to £3,000 towards double glazing and loft insulation. Over 40% more homes will be protected from noise than were covered with the old scheme.

Addressing the impact of noise on local communities will be a critical issue in winning local support and for the Airports Commission’s assessment of its short listed options. How scheme promoters address noise reduction, mitigation and compensation will be a primary focus of public debate on the benefits and impacts of a new runway being built in London and the South East.

You may also be interested in:  London Gatwick Airport announced that Air China will continue operating direct summer 2014 services between Gatwick and Beijing

About Gatwick’s new noise insulation scheme
Gatwick’s noise insulation scheme goes further than any other airport in the UK and Europe. It has reduced the noise threshold for the scheme, with the boundary line drawn flexibly to ensure entire roads and communities are included. The boundary has also been extended along the flight paths by 15km to both the east and west of the airport. This will mean that over 40% more homes are now eligible than under the old scheme.

You may also be interested in:  COVID-19: Gatwick launches range of measures to protect the wellbeing and safety of both passengers and staff

About the London Airspace Consultation
Between 15 October 2013 and 21 January 2014, Gatwick and NATS – the UK’s leading provider of air traffic services – asked people living across Sussex, Surrey, Kent, Essex, Suffolk and Hampshire to have their say on the positioning of new flight paths in their local area.

This information will be used to help establish new routes which offer the most benefit with the least possible impact, with a particular focus on reducing the impact of aircraft noise.

Airspace above the south of England is some of the busiest in the world. This consultation is the first stage in a wider programme of proposed changes to deliver the UK’s Future Airspace Strategy (FAS), which will be legally required to come into effect in 2020. 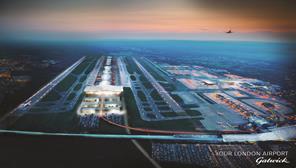