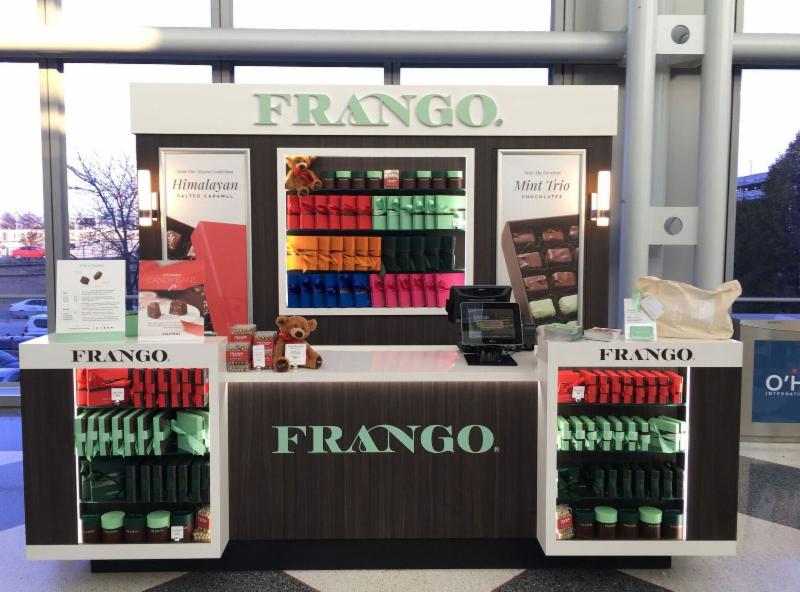 Since 1929 Chicagoans have enjoyed Frango confections and for a limited time Frango has launched a holiday boutique at O’Hare in Terminal 1, Concourse B, near gate B12. This pop-up store features the iconic Frango chocolate truffles wrapped up in new vibrant packaging, featuring classic flavors, new flavors and new limited-time holiday flavors. The Frango shop at O’Hare operates under Garrett Brands, with two Garrett Popcorn Shops locations near gates B8 in Terminal 1 and H2 in Terminal 3.

InMotion Entertainment offers cutting edge technology and electronics from in-demand brands includingBose, Apple, FitBit, GoPro, Dr. Dre and others, and is open in Terminal 2. Travelers will find handy, high-tech gadgets perfect for travel, and items to give as gifts. Products include headphones, phone chargers, camcorders, luggage and other electronic and travel accessories. The holiday pop-up store is located near gate F9. InMotion Entertainment operates three permanent locations at O’Hare near gates B7 in Terminal 1, and H2 and K12 in Terminal 3, as well as a Headphone Hub location in the main hall of Terminal 2.

The Pop Gallery store now open Terminal 3 also operates in Florida’s Disney Springs and features “art the pops!” Shoppers will find contemporary artist originals, prints and books, along with collectibles and toys. Wide-eyed art from Jasmine Becket-Griffith and whimsical selections from Fabio Napoleoni are available. The store is in the Concourse H/K connector hallway near gate H6. Hoypoloi Gallery operates two stores at the airport near gates B6 in Terminal 1 and E5 in Terminal 2, where everyday offerings include jewelry, books, art, collectibles and Chicago-themed products.

In addition to the new pop-up shops, the Fly with Butch O’Hare Lounge which first appeared at O’Hare for the summer, has popped up again this holiday, decked out in festive trimmings.  The lounge offers a place for travelers to relax before boarding their flights, complete with chairs and charging stations. The lounge theme pays homage to Butch O’Hare, World War II Hero and the airport’s namesake.