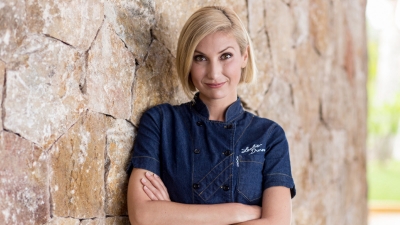 Punta Mita, México, 2017-Sep-01 — /Travel PR News/ — Four Seasons Resort Punta Mita, a five-star luxury resort tucked into the lush landscape of the Riviera Nayarit, announces a culinary partnership with celebrated vegan chef and healthy living educator Leslie Durso to create new plant-based offerings at the Resort’s three dining destinations – Aramara, Bahia by Richard Sandoval and Ketsi.  Inspired by a commitment to fresh, local ingredients and a desire to cater to an array of healthy lifestyles, the Resort is elevating its vegan dining with the addition of 25 new innovative, plant-based dishes designed by Durso, including appetisers, soups, salads, entrees and desserts.

“Through our partnership with the talented Leslie Durso we are setting a new standard in healthy resort dining with elevated vegan offerings across our entire restaurant portfolio,” says John O’Sullivan, General Manager, Four Seasons Resort Punta Mita. “Working alongside our team of chefs, Durso has created plant-based dishes that are both nourishing and delicious, infused with flavours and ingredients authentic to the paradise destination of Punta Mita.”

The locally-inspired vegan dishes created by Durso are available at the Resort’s signature dining destinations Aramara, Bahia by Richard Sandoval and Ketsi, and through in-room dining:

“Four Seasons Resort Punta Mita is truly paradise so it was important to create dishes from locally sourced ingredients in a way that honours Mexican culture and also brings it into the plant-based world,” says Chef Leslie Durso. “I wanted to ensure the recipes would seamlessly align with the Resort’s current offerings at each restaurant and worked closely with the wonderful team of chefs to create dishes that are tasty, healthy and familiar.”

A globally recognised chef and healthy living educator, Durso is known for creating cuisine that reflects a fresh plant-based movement and refuses to compromise style for sustainability. She has worked as a private chef for New York socialites, catered to the Hollywood elite and appeared on national television networks including Food Network and CBS. An avid world traveller, Durso has immersed herself in some of the most inspired kitchens in the world, from Thailand to Peru to Italy, and boasts a unique ability to create vegan dishes that are familiar, yet strikingly creative and different.

A leader in luxury wellness travel, Four Seasons Resort Punta Mita recently unveiled a multi-million dollar renovation, including a fully re-imagined Apuane Spa and new wellness and fitness programming. Notable additions to the Resort’s wellness portfolio include myDNA Retreat, a revolutionary program offering individual wellness recommendations based on genetic testing, and new fitness classes include AquaForza – a functional and heart-pumping cardio and strength workout performed on a floating board in the water, and AntiGravity fitness and aerial yoga – classes performed suspended in fitness hammocks that take guests through a series of yoga, Pilates and ballet positions.