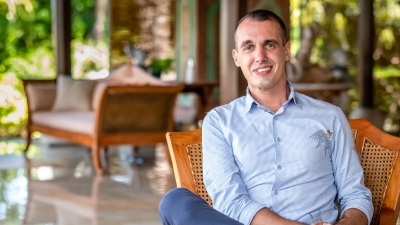 “It has been an inspiration to work with Nicolas over the last four years in his capacity as Food & Beverage Director, and to have his strong leadership during a most challenging time,” says Uday. “His creativity, energy and passion for training and developing staff ensures the highest standard of Four Seasons service, to deliver outstanding experiences for guests. I know he will make an excellent Resort Manager and bolster our team as we strive onwards and upwards.”

Nicolas has been with Four Seasons since 2004, when he started as an Assistant Steward Manager in Provence in his native France. Prior to Bali, he headed up food and beverage operations in Singapore and spent five years in China with Four Seasons Hotel Guangzhou and the former Four Seasons at Shanghai Pudong.

“Nicolas’ career as a Food & Beverage leader has spanned both urban and resort properties, and he’s excelled in both environments,” says Uday.  “I’m delighted to expand his responsibilities as Resort Manager at Jimbaran Bay. He brings so much value and energy to the role, and a passion for Bali, which has become his second home with his wife and daughter.”

Among other recent promotions at the two Four Seasons Resorts Bali at Jimbaran Bay and Sayan, two senior chefs have stepped up to executive roles:

Made Adi Jaya has been appointed Executive Sous Chef as he takes on a Resort-wide role, reporting to Executive Chef Phillip Taylor. The pair oversee culinary operations across all outlets at the Resort: Sundara as the flagship restaurant overlooking Jimbaran Beach, Taman Wantilan’s global cuisine with nine live cooking stations, Alu poolside café, Jala Balinese restaurant and cooking academy, In-Villa Dining, catering for weddings and events, and culinary adventures such as the Ocean-to-Table “day in the life of a Balinese fisherman” excursion.

Adi Jaya was promoted from his position as Chef de Cuisine at Sundara. His culinary career with Four Seasons started as a student intern in 1995, and he worked his way through the Resort’s various restaurants and In-Villa Dining, becoming an indispensable part of the team. When Sundara’s former Executive Chef Liam Nealon (now at Four Seasons Resort Chiang Mai) was asked by a journalist what the most important ingredient in his kitchen was, he answered without hesitation, “Made Adi Jaya.”

Adi Jaya’s early mentor at the Resort was celebrity chef Vindex Tengker, who gave him a strong foundation in modern Indonesian cuisine. He also trained under top chefs in Korea and at the Michelin-starred French and Chinese restaurants at Four Seasons Hotel Hong Kong, broadening his knowledge of flavours and techniques to bring back to Bali.

You may also be interested in:  Marriott Bonvoy launches Summer/Fall Promotion

Wayan Sutariawan (Suta) has been promoted to Executive Sous Chef of Four Seasons Resort Bali at Sayan. As head chef of the resort, he oversees Ayung Terrace restaurant, Riverside restaurant, Sokasi cooking school, Jati Bar, In-Room Dining, and culinary experiences such as the Megibung dinner on the River Terrace and Chef-Guided Picnic in the surrounding wilderness.

Suta, who was Senior Sous Chef before his promotion, joined Four Seasons in 2006. But his technical training – and his passion for authentic food – began at the age of 12 when he was adopted by his auntie and exposed to regional dishes from across Indonesia. He has just released a cookbook, Cherished Recipes From My Childhood to share his favourite recipes, many of which are available for guests to enjoy at Ayung Terrace. It also contains “forgotten” Balinese recipes that Suta is on a mission to keep alive with the Chef’s Table dinner at Sokasi cooking school. Along with his local expertise, Suta also brings strong international experience to the Resort’s menus, having spent five years at Four Seasons Resort Maldives at Landaa Giraavaru.