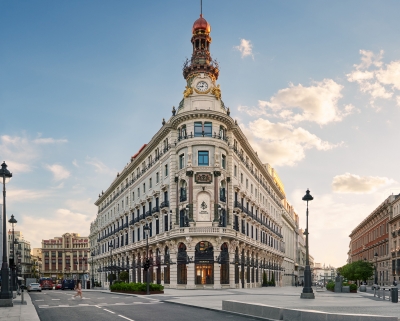 On September 25, the brand’s first hotel in Spain will be celebrating its first anniversary with the excitement of having become a popular destination enjoyed by its guests and all the people of Madrid

Madrid, Spain, 2021-Sep-22 — /Travel PR News/ — On September 25, 2020, against a backdrop of uncertainty, Madrid witnessed one of the most eagerly awaited openings: the first Four Seasons hotel in Spain. A milestone that became a sign of hope and expectation for a city that was going through a difficult situation, which saw the revival of one of the city’s historic landmarks the motivation to continue fighting and trusting in better times.

Since then, the support and acceptance of the local market has been key in this first year of Four Seasons Hotel Madrid. The restrictions put the focus on the public who were captivated by a unique range of services: rooms and suites, restaurants, El Patio and Dani Brasserie, and SPA.

Today there are almost 355 employees, of which 52 percent are men and 48 percent women, who are working thanks to the support of OHLA and Mohari, owners of Complejo Canalejas Madrid, where the hotel is located. This team is characterised by a spirit of belonging, in which young professionals work alongside those with extensive experience, creating a friendly atmosphere and a feeling of solidarity in every sense of the word.

During this first year, the commitment to its employees and its communities has been a priority: from the 1000 meals a day campaign that the hotel distributed to the most disadvantaged families to the social actions that were carried out during Christmas when it collaborated with various local organisations. A partnership that will further strengthen the bond with its neighbours, who have been so welcoming.

Despite the situation it had to face, Four Seasons Hotel Madrid can report a good occupancy rate throughout this first year.

The trust and confidence transmitted through its Lead With Care global health and safety programme have been key to creating a relationship with all those who want to experience a historic site, in a safe and secure manner. This program has established criteria and processes that train and empower employees to take care of guests and co-workers alike.

A year of thrill where Madrid´s sky has been closer than ever, where the doors of 7 buildings that had been raising expectations and awakening memories were reopened, and where Christmas illuminated a city that had never ceased to relish every moment to the full.

Four Seasons Hotel Madrid is proud to be a model in this new chapter for Madrid’s luxury hotel and catering sector. It puts the capital on the map as a luxury destination where you can find the perfect combination of gastronomy, wellness, leisure, and art through quality and luxury.

A Year-End Full of Surprises

Following this first year, the hotel is looking forward to the coming months with the same enthusiasm and continuity in creating experiences that will captivate the local people and the international guests who are gradually returning to the Spanish capital.

ISA, a name that will leave no one indifferent. A new culinary concept that will open at the end of the year, and aims to become a flagship establishment in the capital. Where the fusion of Asian and local cuisine results in a cosmopolitan, seductive, and inviting space; the perfect place to end the day. A casual menu, designed for sharing, where Asian tapas coexist with spectacular cocktails created by its award-winning bartender, Miguel Pérez, and where a DJ livens up an atmosphere full of mystery that yearns to be discovered.

Another jewel to be unveiled at the end of the year is the Royal Suite, the largest and most historic room in the hotel. A witness to outstanding moments, what was once the “Conversation Room” of the Madrid Casino in the late 19th century and, subsequently, the office of the various directors of the bank that occupied this building, has been reinvented as a palatial apartment measuring 400 square metres (4,300 square feet) where the new and the traditional go hand in hand.

A bedroom with a wealth of historical details, many of them restored on site, which highlight the history of one of the hotel’s most important spots. An ideal place for private and exclusive stays and events.

Finally, the SPA, the largest urban wellness centre in Spain, seeks to consolidate its position as a model of wellness in the country with a proposal where personalised treatments by exclusive national and international brands are an attraction for those in search of the most exclusive level of wellness. Over the past year, the hotel has launched an exclusive Membership Program, where members with daily access to the facilities can enjoy numerous advantages in treatments, experiences, and exclusive events, as well as free parking and other services.

A special year that could not have been possible without the support of an entire local community that welcomed the hotel with open arms and that encourages us to continue dreaming and creating memories. The philosophy of Four Seasons Hotel and Resorts merges with the essence and magic of one of the most traditional areas of the capital and aims to be promoted around the world, making Four Seasons Hotel Madrid a destination in itself where the real experience begins.

“Given the circumstances of the pandemic, the opening of the first Four Seasons hotel in Spain has posed certain challenges, however, we are extremely pleased to celebrate the achievements of this first year. It has been twelve months of learning, of great commitment to positioning Madrid as a luxury destination as well as bringing together a team of excellent professionals. We are in the “people” business and displaying a great level of compassion in such difficult times is extremely important to instil our Four Seasons culture into a new market. I am tremendously proud of the team and together we can embrace the future with optimism, eager to continue to grow and raise awareness of our product among local and international customers,” explains Adrian Messerli, Regional Vice President and General Manager of Four Seasons Hotel Madrid.