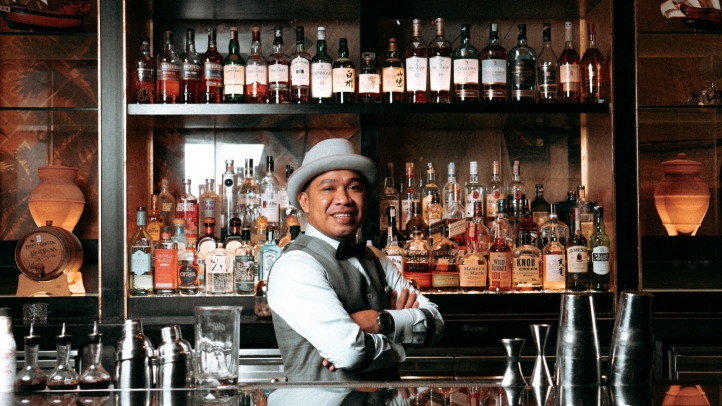 #MeetMeAtNautilus for cool cocktails in a lively ambience, hosted by one of Jakarta’s favourite bartenders

Jakarta, Indonesia, 2021-Aug-20 — /Travel PR News/ — This summer, Henry Maraben Siktimu (better known as Ale) takes centre stage at Nautilus, the celebrated bar at Four Seasons Hotel Jakarta. As Bar Manager, Ale plans to infuse this drinking destination with a dynamic new energy and reinforce its status as a go-to for the city’s cocktail lovers. Guests can expect equal parts nostalgia and innovation, with a menu that draws on traditional Nusantara ingredients as well as cutting-edge mixology techniques, all while staying true to the impeccable luxury standards for which Four Seasons is known around the world.

A bar veteran of more than 12 years, Ale is no stranger to Jakarta’s cocktail connoisseurs. “Along with an updated selection of whiskies, tequilas and gins, we will now highlight Indonesian spirits at Nautilus,” he says. Other items in the pipeline include homemade vermouth with a local touch, and seasonal cocktail menus with fresh fruits, herbs and spices. Under his leadership, the bartending team will also use creative techniques to extract different flavours and textures from every single ingredient.

Hailing from Kupang in Nusa Tenggara Timur, Ale arrived at his career by a roundabout route. “I grew up in a place filled with beautiful nature and incredible food. But not many bars!” he says with a smile. Young Ale’s interest lay in science and IT, which led him to Yogyakarta for higher studies. But everything changed when he visited his cousin, a bartender in Jakarta. Here was a whole new world, pulsing with energy, interaction and fun. “I knew instantly that this was me. This was where I wanted to be,” he says, recalling how he then had to take the toughest decision of his life – to halt his pursuit of higher education, and become a bartender instead.

It was an uphill journey. Returning to Yogyakarta, Ale found a job at a small café where he started out making non-alcoholic drinks – iced teas, juices, mocktails. A few years later, he moved to Jakarta and began working at a nightclub, soon graduating to bartender. All this time, he kept learning, exploring and honing his craft: “Ultimately, I felt it was time to introduce myself to the industry.” Showcasing his talent at competitions shot him into the limelight, landing him his big break with one of Jakarta’s leading food and beverage groups. Over the next nine years, he gained experience at two top-notch outlets, climbing the ladder from bar captain to supervisor and finally mixologist.

Over the years, Ale has racked up a multitude of titles and achievements. He won the London No. 3 Cocktail Competition 2015 and took home the award for Best Cocktail at the Diageo World Class Final Competition 2017, beating out some of the best bartenders in the country. The drink that catapulted him into the big leagues? The Nusa Lontar, a tribute to his hometown’s love for the palm tree. This concoction combines sopi, a local Indonesian spirit, with palm sugar, makrut lime cordial and soda made from virgin palm water. Patrons at Nautilus can try an updated version of this award-winning drink.

Food, too, is an important inspiration for the maverick mixologist. “Here in Indonesia, we have such a rich culinary culture. I want to bring some of those food experiences into our beverage offering,” he explains, giving the example of the Nastar Occasion. Featured on the Nautilus menu, this celebratory cocktail is inspired by Ana Nastar, the festive pineapple cookies beloved by Indonesians.

What is the secret to a perfect cocktail? “Tension, balance and dimension,” says Ale promptly, adding that it’s the little things that count the most. “My team and I are taking Nautilus to the next level. We can’t wait for our guests to meet us there.”