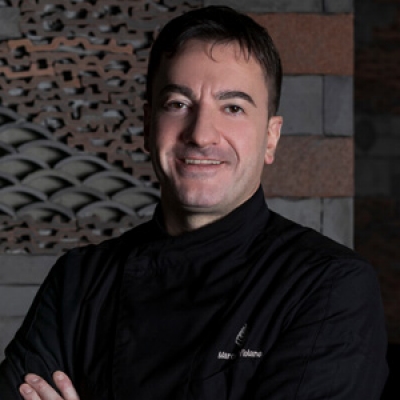 Like many Italian chefs, Marco too believes that his mother has been the biggest influence on his cooking style, and his understanding of food. He says, “She was always cooking from the heart, always trying to please my father, grandmother and her children. I call this ‘Mama-style cooking’ and this is what I want to create and my guests to experience. I want them to feel the love in the food.”

Chef Marco’s extensive culinary experience includes internationally acclaimed restaurants and luxury chain hotels worldwide, including Four Seasons in London, Milan and Beijing. Most recently, he was part of the team that was awarded with one Michelin star each for both Mio and Cai Yi Xuan restaurants at Four Seasons Hotel Beijing.

Born in a small hill town, Apulia (Puglia) in southern Italy on the Mediterranean coast, his cuisine also has influences from Arabia, Greece and Spain, and he enjoys dishes where he can combine fish and shellfish from the sea and produce from the valleys.

Chef Marco also had another great influence, a great mentor that taught him that respecting food and its origin is the most important, and to keep it simple, not to overwork the product. This is what Chef Marco aspires to produce now, a blend of ingredients that work together because of their freshness and origin. This is evident in each of his dishes, which have a creative soul and a passionate flair, and yet at their core they are humble, tasty and Italiano. He is adept at creative menu development and is constantly bringing innovative takes on classic dishes, as it were to the table.

Not only a master of his craft, he is also a great teacher. His ability to involve his kitchen associates in the preparation, cooking, garnishing and presentation of the food to the highest standards ensures that he retains a successful track record of impressing customers with delicious meals and decorative food displays time and time again.

“I look forward to working together with the whole team at Four Seasons Hotel Jakarta to elevate the sense of culinary excellence that the Hotel has been able to establish in the city, in such a short time span, since its opening. I am of course most excited about what I can bring to Alto Restaurant & Bar and relish the opportunity but also recognise the responsibility of serving the best Italian in town,” adds Chef Marco.