“We are proud to receive this recognition from TripAdvisor, which is a testament to providing our guests with the highest level of service and personalised hospitality of Four Seasons,” says Mahmoud ElKeiy, General Manager ofFour Seasons Hotel Cairo at The First Residence.

Now in its sixth year, the achievement celebrates hospitality businesses that have earned great traveller reviews on TripAdvisor over the past year.

Whether it’s afternoon tea at the Tea Lounge or soaking in the midday sun by the Nile at Aura, the Hotel’s authentic Shami-inspired poolside restaurant, Four Seasons Hotel Cairo at The First Residence has gained a well-deserved reputation as an elegant and exclusive sanctuary in the heart of Cairo.

From spending the day by the pool to enjoying the deluxe services of the Spa or shopping in the First Mall – home to 59 high-end boutiques and shops – there are plenty of ways to make the most of an extra day in one of the Arab world’s most fascinating cities while enjoying the intuitive service and warm hospitality that underlines the Four Seasons experience the world over. 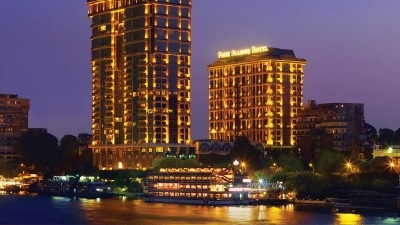