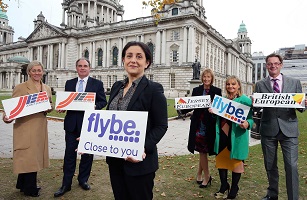 The event was attended by a many of the leading figures from across Northern Ireland’s tourism industry who have supported Flybe during the last 35 years. Ms. Ourmières-Widener took the opportunity to thank those in attendance for helping Flybe succeed in Northern Ireland and highlighted the wealth of routes and connections from Belfast City to the rest of the world through Flybe’s airport hubs.

Originating as an air-taxi company owned by a family run steel company C Walker & Sons, Spacegrand Aviation as it was known then, made its first official flight to Belfast Harbour Airport from Blackpool in 1983. A few months later Walkers Steel Group bought over Jersey European Airways and the airline began commercial activity from Belfast.

From those early days of 19 seater Twin Otter aircraft and limited destinations Flybe has grown and evolved alongside Belfast City Airport to offer up to 295 flights per week to 15 destinations across the UK using a core fleet of Bombardier Q400 aircraft.

“We are extremely proud of our long association with Belfast City Airport and have been privileged to both serve our customers in Northern Ireland for over 35 years and employ over 200 local people at what is one of our top four UK bases.

Today we not only offer a comprehensive range of domestic destinations from Belfast but through numerous codeshares and our hubs at Manchester and Birmingham, Flybe’s customers can seamlessly travel to almost anywhere in the world. Such local and global access highlights the sentiment behind our new strapline ‘Close To You’ which is all about convenience both in time and place and strongly reflects our commitment to passengers in Northern Ireland now and for many years to come.”

Responding to radical changes in the aviation sector Flybe was born in 2002 when the traditional airline repositioned itself as a low-fare airline.  Investment in new fleet and services followed with a total brand overhaul to the now familiar purple branding in 2014.

“Belfast City Airport’s relationship with Flybe dates back to when we began commercial operations in 1983 and over the years we have forged a trusting and respectful partnership. Together we have grown, offering passengers an ever-increasing flight network from a modern terminal with facilities aimed at delivering an airport experience that exceeds our passengers’ expectations.

The economic impact of Flybe operating from Belfast City Airport cannot be underestimated both in terms of job creation and allowing business people and leisure travellers the opportunity to connect seamlessly with all parts of the UK.

I congratulate Flybe on this milestone and look forward to continuing and evolving partnership.”

While in Belfast, the Flybe delegation attended a business event organised by the Northern Ireland Chamber of Commerce and sponsored by the Business School at Ulster University. Christine Ourmierès-Widener was the guest speaker at conference, entitled ‘Managing Dynamic Change Through Strong Leadership’. In her address, she talked about her personal experiences of leadership in fast-paced, competitive industry, her plans to lead Flybe through a three-year sustainable business plan and new initiative ‘FlyShe’ which she has launched in a bid to counteract the continued gender imbalance in the aviation industry.