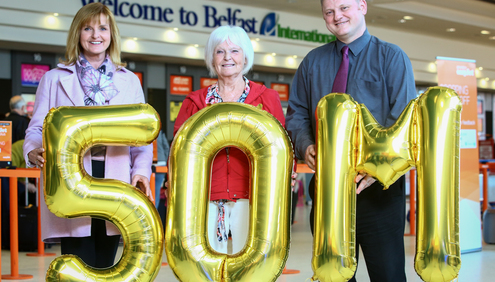 easyJet marks 50 million passengers to and from Belfast International Airport

easyJet launched services from Belfast in 1998 and since introducing their first flight to London Luton has remained committed to the airport by maintaining a continuous operation and flying over 50 million passengers to and from Belfast International Airport.

The airline celebrated the significant milestone by giving the lucky passenger, Isabel Patterson, a pair of flights from Belfast. Other celebrations, including cake giveaways, happened at the airport throughout the day.

The airline established itself as Northern Ireland’s largest airline in July 2001 and since then has continued to build an unrivalled network of routes from the airport.

In 2016 easyJet had over 3.9m seats between the UK and Belfast and in summer 2016 increased seats between London and Belfast by over 9%. For Summer 2017, easyJet has added over 155,000 summer seats from Belfast to London, Malaga, Alicante, Faro, Barcelona, Amsterdam, Palma, Ibiza and Split  taking the total number of easyJet seats available from Belfast over the summer (26th March  – 28th October ‘17) for the first time ever to over 3 million.

The airline continues to see strong growth at Belfast and now has an unrivalled network of 28 destinations including a new service to Dubrovnik which launches on 14 May 2017.

“I am really excited that we have flown our 50 millionth passenger from Belfast today.

“This is a fantastic milestone for us. We have come a long way since the launch of our first flight 19 years ago between Belfast and Luton and since then Belfast has been a key market for easyJet.

“We have added a significant number of extra seats this summer which allows us to continue to provide affordable, convenient connections for our customers whether they’re travelling on business or leisure.”

“I have to thank our fantastic customers who travel to and from Belfast for their loyalty and support.  We remain excited about the future at Belfast.”

“This is a mind-blowing milestone for easyJet today, placed in the context of Northern Ireland’s population of two million people.

Put simply easyJet implemented a social and economic revolution  in Northern Ireland in 1998 through the introduction of generally available, affordable air fares and have become an intrinsic part of our society over the past two decades”

easyJet flies on more of Europe’s most popular routes than any other airline. easyJet carries over 73 million passengers annually, of which around 12 million are travelling on business. easyJet flies over 250 aircraft on more than 870 routes to 138 airports across 31 countries. More than 300 million Europeans live within one hour’s drive of an easyJet airport.

easyJet aims to be a good corporate citizen, employing people on local contracts in seven countries across Europe in full compliance with national laws and recognising their trade unions. The airline supports a number of local charities and also has a corporate partnership with UNICEF which has raised over £8m for the most vulnerable children since it was established in 2012.
The airline takes sustainability seriously. easyJet invests in the latest technology, operates efficiently and fills most of its seats which means that an easyJet passenger’s carbon footprint is 22% less than a passenger on a traditional airline, flying the same aircraft on the same route.

Innovation is in easyJet’s DNA – from our launch just over 20 years ago when we changed the way people fly to the present day where we lead the industry in digital, web, engineering and operational innovations to make travel more easy and affordable for our passengers.