easyJet opened  a permanent base at Liverpool John Lennon Airport in June 1999 and has since flown almost 15 million passengers from the airport.  The latest recruits to join Liverpool will work across 30 routes including Newquay and Menorca which return for the summer season.

Liverpool was one of easyJet’s first UK bases and today employs over 240 staff, with seven aircraft permanently based at the Airport. The new Cabin Crew have recently completed three weeks of full time training at easyJet’s academy covering all elements of the flying experience from customer service and first aid to safety requirements and food service.

Alison Gayward, Commercial Manager for easyJet in Liverpool, said: “We’re proud to celebrate our 15thanniversary at Liverpool John Lennon Airport, which was one of easyJet’s original UK bases.  Since that date our crew and pilots have helped almost 15 million passengers safely reach their destination on a network that now spans the UK and Europe.

“We expect this to be one of easyJet’s busiest summers and as a result we’re pleased to welcome 17 additional crew to Liverpool to help customers enjoy an easy and stress free start to their holiday. During August and September easyJet will operate up to 342 flights per week from Liverpool to destinations as varied as Amsterdam, Larnaca and Berlin.”

New Cabin Crew member Janine Lee, aged 23 from Liverpool, said: “I am most excited about flying all across Europe and meeting lots of new people on the way.”

You may also be interested in:  AEGEAN: All are welcome, as long as we all pay the same taxes

Emma Jane Graham, also from Liverpool said: “I’m most excited about meeting new people and working as a team in the sky and being part of the easyJet experience.”

Robin Tudor, Head of PR at Liverpool John Lennon Airport added, “It’s a well-known fact that airlines based at airports create jobs. easyJet’s base here at Liverpool has continued to provide career opportunities across the region over the past 15 years and we are delighted to see these latest new recruits flying with easyJet from their local airport.” 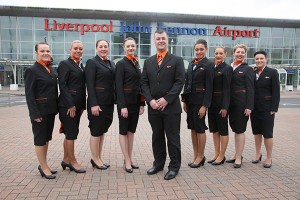