“On behalf of Mayor Rahm Emanuel, we truly welcome this connection that will deepen the ties between two of the world’s busiest airports in terms of commercial travel, with a combined traffic flow of approximately 133 million passengers in 2013,” said Commissioner Andolino. “We look forward to building on O’Hare’s successful relationship with Emirates and know that many international travelers will take advantage of this new route.The addition of Emirates service alone will generate approximately $200 million in annual economic activity and furthers the Mayor’s goal of Chicago hosting 55 million visitors by 2020. ”

In addition to passenger service, the Chicago-Dubai flight will carry up to 17 tons of cargo and increase trade links between the two cities. Emirates began operating cargo service to Chicago in 2013 and currently flies a twice-weekly, dedicated freight service out of O’Hare that carried nearly 12,000 tons of cargo last year.

You may also be interested in:  Emirates celebrates Oktoberfest with Bavarian specialties on board and in its airport lounges

“The Dubai-Chicago route extends our passenger network to America’s third-largest city and complements our existing dedicated freighter service that operates to O’Hare,” said Emirates’ Al Redha.. “This new route will allow us to offer Emirates’ unique product and award-winning service to passengers flying to and from the Midwest to our home in Dubai or onwards to over 140 global destinations including the Far East, Africa and India.”

“We are thrilled to be part of this celebration with Emirates and look forward to sharing our remarkable city with you,” Welsh said. “Our city offers the very best hotels and some of the best restaurants in America, not to mention extensive cultural attractions. We thank you for choosing Chicago!”

About Emirates- Emirates was founded as an airline in 1985. It now flies to 143 destinations in 81 countries across six continents, providing air services that enable trade and travel to its home base in Dubai and beyond. Based in Dubai, Emirates is one of the world’s most recognized airline brands through its support of premier sports and cultural events.

You may also be interested in:  Emirates further enhances smart contactless journey for passengers travelling from Dubai 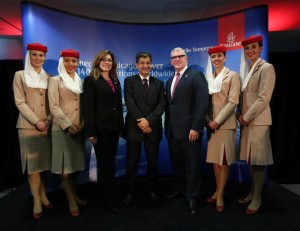