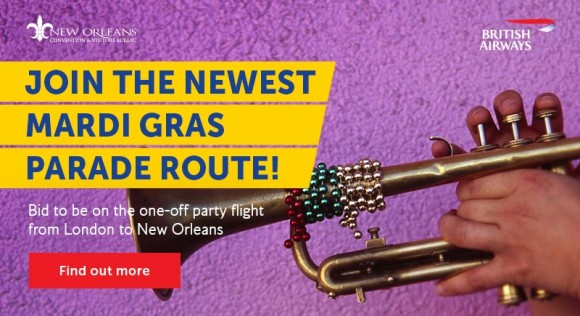 From 10am on November 20, partygoers will be able to bid to secure their seat on a special celebration flight – the only way to get to the party from London – on eBay.

Customers will be treated to an exclusive gig in the sky while chefs and mixologists serve up a New Orleans inspired Creole menu and shake signature cocktails at 40,000ft.

The 50 pairs of British Airways Holidays packages will be auctioned off between 10am on November 20 and 11pm on December 3, with lots starting from only a penny.

Adam Daniels, British Airways’ chief commercial officer, said: “New Orleans is famous for jazz, the French Quarter, Bourbon Street and Creole cuisine; but there’s one event in particular that makes the city stand out. Mardi Gras is an once-in-a-lifetime, bucket list experience so we are incredibly excited to give customers the chance to fly direct to the party!

“This is the first time ever we have hosted a VIP charter ahead of a new route so we are sure it will create a buzz even before our customers touch down in New Orleans.”

Stephen Perry, President and CEO of New Orleans Convention & Visitors Bureau said: “Mardi Gras in New Orleans is a feast for the senses that creates lifelong memories and leaves visitors eager to return year after year to explore it further. Its traditions, pageantry, and citywide spirit of communal celebration reminds everyone who experiences it that New Orleans’ joie de vivre is second to none.”

From March 27, 2017 British Airways will launch a four times a week service from Heathrow and will be the only airline flying direct between Europe and the Louisiana city.

Each package will include direct return flights, three night’s accommodation at one of three hotel options, transfers and Mardi Gras grandstand parade tickets for February 25.

British Airways will also be donating 10 per cent of all auction bookings to Flying Start, the airline’s charity partnership with Comic Relief.

To join the party head to: http://stores.ebay.co.uk/britishairways

•Only customers over 21 years old will be able to join the exclusive charter
•Hotel options are: Hampton Inn and Suites of New Orleans and Baton Rouge, Omni Riverfront, The Troubadour
•Hotel based on two people sharing
•Comic Relief’s registered charity number is 326568 (England/Wales) and SCO39730 (Scotland)
•The route will be operated by a three-class Boeing 787-8, with return fares in World Traveller starting from £599, £899 in World Traveller Plus and £1749 in Club World.
•The flights will run on Mondays, Wednesdays, Fridays and Saturdays with the BA225 departing from London Heathrow at 3:40pm and arriving in to Louis Armstrong New Orleans International Airport at 7:40pm, while the BA224 will leave New Orleans at 9:10pm, arriving into London at 12:00 noon the next day.
•For more info on the parade visit: https://www.mardigrasparadetickets.com/pages/parade/34

Media in the UK can contact our London office:
Email: press.office@ba.com