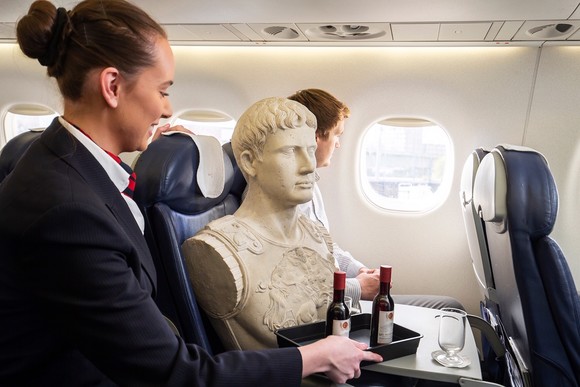 LONDON, UK, 2018-Nov-13 — /Travel PR News/ — Everyone is talking Italian at London City Airport this week where British Airways is celebrating the launch of new flights to the capital city of Rome.

The year-round service is the fourth Italian city to be served by British Airways direct from the Docklands and will operate every day except Saturday.

A special bust of one of Rome’s most famous forefathers, Julius Caesar, was drafted in to greet customers on the first flight.

The bust was welcomed on board the Embraer 190 jet by British Airways’ inflight business manager and fellow Italian Marco Tagliaferri, one of 15 Italian cabin crew and flight crew who work on board flights to and from London City.

British Airways’ airport manager, Andrea Sperini, is also Italian although he was born in Venice.

He said: “I’m very proud to see the Italian capital becoming part of our network. It is one of the oldest cities in Europe and a treasury of art, history, traditions, politics and local food – almost anyone can find something to explore and enjoy. “

Luke Hayhoe, British Airways’ general manager commercial and customer, said: “We are delighted to add another capital city to our schedule taking the number of routes we fly from London City to Europe up to 34. Rome is a destination that will be welcomed by both our leisure and business customers and alongside Florence, Milan and Venice will be our fourth route to Italy.”

Each way hand baggage only fares to Rome from £70 are available on www.ba.com

Richard Hill, Chief Commercial Officer at London City Airport, said: “By adding another major European city to its network, British Airways is creating further choice for tourists and business travellers who want to use London’s most central airport as their bridge to the continent.

“Like London, Rome is an iconic destination, bursting with culture, history, and home to an international business district, and the route is an attractive addition for customers to and from Italy’s capital city. Ahead of a 20 per cent boost in capacity during 2019, this new service further underlines British Airways’ continued investment in their London City operation.”

British Airways is investing £4.5 billion pounds for its customers over the next five years. This includes the installation of the best quality WiFi and power in every seat, fitting 128 long-haul aircraft with new interiors and taking delivery of 72 new aircraft. The airline will also be introducing new Club World seat with direct aisle access next year.

As part of that investment the airline recently unveiled a brand-new lounge at  Rome’s Fiumicino Airport. It features the very best of British and European design delivering a luxurious and contemporary look and feel. Spread over 460 square metres, the space can comfortably host almost 140 customers. It also features a number of zones that create separate spaces for customers to work or relax in ahead of their flight.