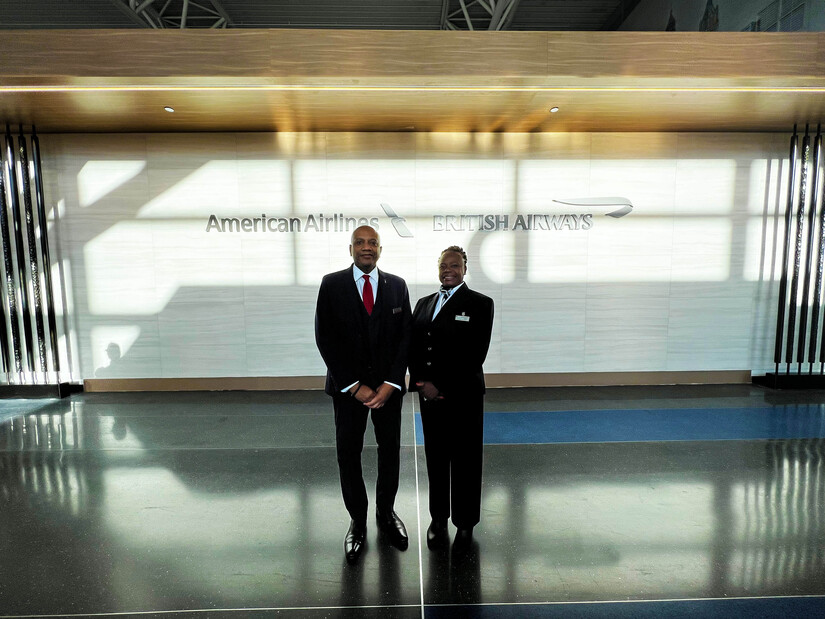 New York, USA, 2022-Dec-01 — /Travel PR News/ — American Airlines and British Airways are ready to welcome customers to the newly renovated Terminal 8 at New York’s John F. Kennedy International Airport. Starting on Dec. 1, 2022, customers will benefit from an enhanced travel experience with seamless travel connections as the two airlines co-locate operations as part of a $400 million investment. This marks the completion of the first phase of the Port Authority of New York and New Jersey’s redevelopment of the airport.

To celebrate British Airways’ move from Terminal 7 to Terminal 8; New York Governor Kathy Hochul, the Port Authority of New York & New Jersey, American Airlines and British Airways today announced the opening of a newly expanded Terminal 8, marking completion of the first phase of the historic JFK Vision Plan that is transforming the international airport into a world-class global hub.

Governor Hochul said: “The completion of Terminal 8 is the latest milestone in our historic efforts to build a whole new JFK worthy of New York,”

“I congratulate American Airlines, British Airways and the Port Authority for the first of what will be many milestones to come. We will continue our close partnerships as we transform JFK into a magnificent global gateway that will help to keep New York at the center of the world stage.”

American Airlines CEO, Robert Isom said, “We are thrilled to welcome our long-standing joint business partner, British Airways, as it joins American and other oneworld partners at Terminal 8. As part of our investment to transform JFK into a leading global airport, we are excited to offer customers expanded terminal space, new check-in areas and elegant lounges.”

You may also be interested in:  AAAE Urges Congress to Update Tax Code and Airport Financing Model to Boost Infrastructure Investment

British Airways Chairman and CEO, Sean Doyle said, “We announced our joint investment early in 2019 so it is an honor to reach this significant milestone with our business partner, American Airlines. From December 1, our customers and colleagues will be able to enjoy all the benefits that Terminal 8 has to offer.”

Port Authority Executive Director, Rick Cotton said, “This inspiring expansion of Terminal 8, fostering superb hourly services between JFK and London, is an example of what’s to come at JFK, where our vision for a world-class, 21st century airport is now unfolding from one end of the airport to the other. Thanks to the investment made by American Airlines and British Airways, Terminal 8 – with five new wide body gates – offers an improved passenger experience and expanded capacity for transatlantic travel to and from JFK. This investment by our private partners at Terminal 8 is a vote of confidence in the future of the airport and of the JFK region.”

Operational enhancements of Terminal 8 include five new widebody gates, four new widebody parking positions, and an expanded and upgraded baggage handling system that will together support additional transatlantic flights. The terminal has also been expanded with approximately 130,000 square feet of additional and refurbished space.

Premium customers traveling on both airlines will be able to enjoy an elevated travel journey. Upon arrival at JFK, premium customers will be greeted at the brand new co-branded premium check-in area providing personalized, concierge-style service. Thoughtfully designed architectural elements will also define an exclusive check-in space for eligible customers.

Once through security, three distinctive custom lounges that combine the best of both brands will provide a refined, welcoming pre-flight experience for eligible customers based on cabin of travel and loyalty program status. The two brand new lounges – Chelsea and Soho – have been designed with original high-end finishes — evoking a unique sense of space while elevating the experience and service offered to every guest. Gensler, the world’s leading architecture and design firm, was commissioned to design the premium check-in area and lounges, and Sodexo Magic will deliver an outstanding offering of food and drinks to lounge customers.

Terminal 8’s expansion is a critical component of the JFK Vision Plan that is transforming the airport into what will be one of the world’s finest international gateways with a 21st-century customer experience and increased connectivity for travelers. The move by British Airways will bring the storied carrier closer to its partner airlines as Terminal 8 becomes home for five oneworld® Alliance carriers. Iberia plans to move into Terminal 8 on Dec. 1, and Japan Airlines expects to move its operations to Terminal 8 in May 2023.

To Care for People on Life’s Journey®. Shares of American Airlines Group Inc. trade on Nasdaq under the ticker symbol AAL and the company’s stock is included in the S&P 500. Learn more about what’s happening at American by visiting news.aa.com and connect with American on Twitter @AmericanAir and at Facebook.com/AmericanAirlines.

As a global airline and the UK’s flag carrier, British Airways has been flying its customers to where they need to be for more than 100 years. The airline connects Britain with the world and the world with Britain, operating one of the most extensive international scheduled airline route networks together with its joint business, codeshare and franchise partners. British Airways flies to destinations in more than 65 countries. Its principal place of business is London, with its main home at Heathrow Terminal 5. In 2021, the airline won six Business Traveller Awards including Best Short-Haul Carrier, Best Airport Lounge, Best Frequent Flyer Programme, Best Travel App and Best New Seat. In September 2021, British Airways launched its sustainability programme, BA Better World, committing to put sustainability at the heart of everything it does and with a clear roadmap to achieve net zero carbon emissions by 2050. British Airways is a founding member of the airline alliance oneworld, which serves around 1,000 destinations across the globe. The latest information on the measures British Airways is taking to ensure its customers have a safe experience when travelling can be found on ba.com.  The British Airways UK press office can be contacted at press.office@ba.com, and their US press office at americas.newsroom@ba.com. To book visit BA.com and connect on Facebook @BritishAirways and Instagram @british_airways

You may also be interested in:  Blue Islands announces codeshare agreement with Loganair