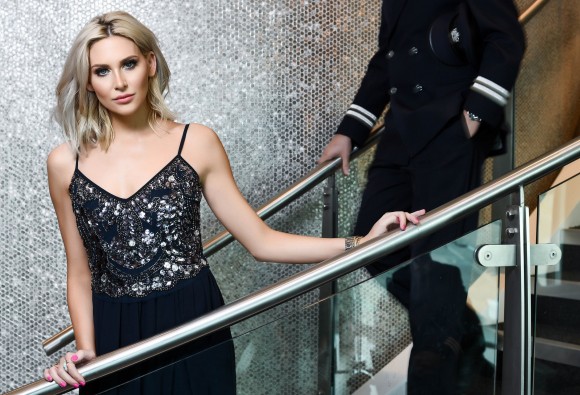 Stephanie, who went to college in San Francisco, stuns in a photoshoot to mark the airline’s first route from Gatwick to California, and its fifth service from London to the ‘golden state’.

The route takes off from March 28 with flights launching from £210 each way based on a return fare.

The 30-year-old reality TV queen teamed a rose gold dress from her own Goddiva clothing line with Christian Louboutin court shoes, as well as a navy dress from her collection teamed with navy sandals from Alexandre Birman.

Stephanie, who studied at the Fashion Institute of Design and Merchandising, said: “I absolutely loved studying in the Bay Area as Oakland and San Francisco are both such cool cities. Oakland is super edgy, it’s like the Californian equivalent of Brooklyn as there are just so many quirky shops and cool bars and restaurants. It’s less than a 20 minute car ride from San Francisco and the perfect place to start a road trip to Napa Valley, Yosemite or Lake Tahoe.”

The former Hills star shares her insider guide on where to go:

For those wanting a taste of the cool Cali lifestyle British Airways Holidays has the following packages on offer:

For more information or to book a flight or holiday, please visit ba.com

•    The route will be served by a 777-200ER aircraft operating up to four-days a week, with flights launching from £210 each way based on a return fare in World Traveller and £920 in World Traveller Plus are available to book on ba.com
•    On Monday, Thursday and Saturday BA2279 will depart from Gatwick at 10:20 and arrive at Oakland International Airport at 13:15 while the BA2278 will leave Oakland at 15:05, arriving into Gatwick at 09:25 the next day. On Tuesday the flight times are 65 minutes later.