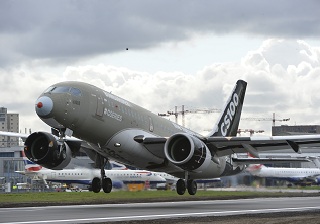 “The CS100 aircraft steep approach certification process went smoothly as the C Series is the only commercial aircraft specifically designed for operations at challenging airports,” said Rob Dewar, Vice President, C Series Aircraft Program, Bombardier Commercial Aircraft. “The C Series has unparalleled capabilities no other aircraft in its category has – it will offer new possibilities for airlines wishing to operate at challenging airports around the world. The CS100 will also double the range that can be flown viably from LCY, opening new routes for airlines and passengers.”

“The latest technology in aural and head-up display systems on-board the CS100 aircraft is used by the crew during the approach and landing phases of flight,” added François Caza, Vice President, Product Development and Chief Engineer, Bombardier. “To be certified for operations at LCY, we had to show that the aircraft could perform at a greater approach angle, take-off and land on the airport’s short runway and meet the local noise requirements. Our crew successfully demonstrated as expected, the CS100 aircraft’s capability and maneuverability. The aircraft now joins our Q400 turboprop aircraft, as well as our Challenger 650, Global 5000 and Global 6000 business jets which already access this challenging airport regularly.”

“The C Series is a game-changer for the only London airport actually in London, and it’s fantastic news that one of the quietest and most fuel efficient commercial jets in its class has been granted regulatory approval. Bombardier’s next generation aircraft will unlock new routes which passengers, both business and leisure, will benefit from, with opportunities for non-stop services to destinations including the east coast of the USA, Russia, West Africa and the Middle East,” said Declan Collier, CEO of London City Airport. “Following the airport’s planned £350 million expansion project we hope the C Series will become a familiar sight at London City Airport and I look forward to welcoming the maiden SWISS C Series flight later in 2017.”

The CS100 aircraft is the most efficient and economical commercial aircraft. The C Series will allow airlines to viably offer direct intercontinental flights from LCY Airport to both North America as well as the Middle-East in addition to opening numerous new route opportunities within Europe, Russia and Northern Africa, which were not possible with previous-generation aircraft.

With the lowest noise and emissions levels of any commercial aircraft in its class, the C Series aircraft is ideal for urban operations and noise-sensitive airports. The CS100 aircraft has a much lower noise footprint compared to other commercial jets, and provides a better quality environment for London residents as it is the quietest commercial aircraft in production.

The C Series aircraft is manufactured by the C Series Aircraft Limited Partnership, an affiliate of the Bombardier Commercial Aircraft segment of Bombardier Inc.

Notes to Editors
Images of the aircraft at London City Airport are posted with this press release at www.bombardier.com.

Bombardier, C Series, CS100, Q400, Challenger 650, Global 5000, Global 6000 and The Evolution of Mobility are trademarks of Bombardier Inc. or its subsidiaries.