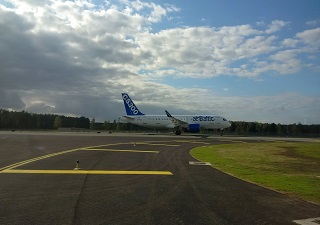 Montréal, 2016-Oct-06 — /Travel PR News/ — Bombardier Commercial Aircraft announced today that its CS300 jetliner, the second CS300 flight test vehicle, has embarked on a series of European and Middle Eastern route-proving flights alongside first operator airBaltic of Latvia. The flights – which will operate from the airline’s base in Riga include stops in Vilnius, Lithuania, Tallinn, Estonia and Abu Dhabi, United Arab Emirates – will use airBaltic air and ground operational practices.

“It’s exciting for the airBaltic team to welcome the CS300 to its home base in Riga for the first time to see the aircraft simulate operations in our route system that covers much of Europe – all in advance of our first delivery later this fall,” said Martin Gauss, Chief Executive Officer, airBaltic. “The CS300 aircraft has outstanding performance, admirable efficiency and an impressive cabin that offers maximum comfort and we are looking forward to introducing this fine aircraft to our passengers and airports in our network.”

“Because of the 99 per cent commonality between the CS100 and CS300 aircraft and the diverse routes that award-winning airline airBaltic operates, we are expecting to see a perfect blend of performance, outstanding reliability and operational ground support,” said Rob Dewar, Vice President, C Series, Bombardier Commercial Aircraft. “Our teams are working closely together as we ramp up activities for a real indication of how the CS300 will operate in the network and we are confident that its entry-into-service with airBaltic later this year will be impressive.”

With a firm order for 20 CS300 airliners – which will eventually join airBaltic’s 12 Q400 turboprops – the airline will gradually transition to an all-Bombardier fleet. The route-proving flights provide a very good indication of how the aircraft will perform in typical day-to-day airline operations by observing airfield performance, airport turnaround times and on-ground operations at various airports.

About C Series Aircraft
The C Series is the only aircraft optimized for the 100- to 150-seat market segment, which drives the aircraft’s phenomenal economic proposition and performance, opening up new opportunities for single-aisle aircraft operation.

Comprised of the CS100 and the larger CS300 aircraft, the C Series family represents the fusion of performance and technology. The result is aircraft that deliver unmatched performance and economics in the 100- to 150-seat market segment and an 18 per cent lower cost per passenger, making them the ideal candidates to complement larger single-aisle aircraft. Airlines can now operate routes that were previously not profitable or even possible. An improvement in range in excess of 20 per cent out of hot-and-high airports such as Denver, Mexico City or Lhasa has been confirmed.

Bombardier has created a new standard in cabin design and flexibility to ensure an unrivalled passenger experience. The aircraft’s larger seats, overhead bins and windows deliver a widebody feel that offers passengers unparalleled comfort in a single-aisle cabin.

The CS100 and the CS300 aircraft have over 99 per cent parts commonality as well as the same pilot type rating. The groundbreaking Pratt & Whitney PurePower® PW1500G engine, combined with the aircraft’s advanced aerodynamics, delivers reduced fuel burn, noise, and emissions –  making the         C Series the most community-friendly aircraft.

Bombardier is headquartered in Montréal, Canada. Our shares are traded on the Toronto Stock Exchange (BBD) and we are listed on the Dow Jones Sustainability North America Index. In the fiscal year ended December 31, 2015, we posted revenues of $18.2 billion. News and information are available at bombardier.com or follow us on Twitter @Bombardier

Notes to Editors
Images of CS300 aircraft are posted with this press release at www.bombardier.com.

Bombardier, C Series, CS100, CS300 and The Evolution of Mobility are trademarks of Bombardier Inc. or its subsidiaries.