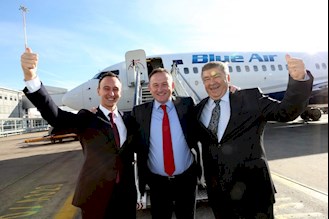 LIVERPOOL, UK, 2016-Nov-14 — /Travel PR News/ — Following last month’s announcement by Blue Air to make Liverpool John Lennon Airport (LJLA) their newest European base, the airline has launched a competition for someone to design the new livery for their 189 seat Boeing 737-800 aircraft that will be based at Liverpool from the end of March next year.

Blue Air are keen to become Liverpool’s airline and are already working with local organisations to help in their recruitment for up to 35 new, direct, local employees. The ’design-a-livery’ competition is another way in which the airline wants to become part of the Liverpool City Region and having shortlisted what they believe are the top 3 designs, Blue Air will then ask the public to vote for the winning design to make it a truly local decision.

The Liverpool liveried aircraft will operate on Blue Air’s new routes from LJLA to Rome, Milan, Hamburg and Alicante and one lucky individual who comes up with the best design, will have this recreated on the aircraft fuselage to be seen by thousands of passengers at LJLA, at airports in Europe and in the skies above Merseyside too.

As well as seeing their design appear on the aircraft, the winner of the competition will also receive two free return flights from Liverpool to any Blue Air destination.

Liverpool John Lennon Airport is working closely with Blue Air on this competition and has set up a link on the homepage of the Airport’s website www.liverpoolairport.com from where budding aircraft livery designers can download an aircraft template on which to complete their design and send in their entry.

Entrants must be 18 or over and the closing date for the competition is 30th November 2016.

Robin Tudor, Head of PR for Liverpool John Lennon Airport commented, “This is a fantastic opportunity for someone to have their idea for an aircraft livery become reality and to be seen by thousands of people at home and abroad.

Blue Air really want to be a part of the City Region and for passengers to think of them as their airline. Painting their aircraft with a livery unique to their operations here at Liverpool is a great way to help achieve this.”